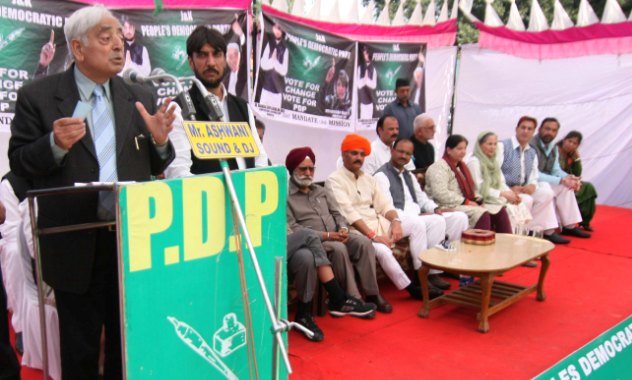 Vijaypur (Samba), November 10, (Scoop News)-Observing that peace is imperative for progress and prosperity of any region, patron of the Peoples Democratic Party (PDP), Mufti Mohammad Sayeed today assured the people that his party will aggressively pursue its agenda to restore lasting and sustainable peace on the borders.
“I assure you PDP will create conducive atmosphere so that farmers of the borders areas can cultivate their land up to the zero line without any fear of bullets or shelling”, Mufti said while addressing an impressive public meeting in support of party candidate for Vijaypur assembly segment, Dr Harmesh Singh Slathia at Vijaypur.
“There is no reason to deprive farmers to cultivate their land which is located on the other side of the border fencing”, he said while referring towards hundreds and hundreds kanal of uncultivated land, beyond the fencing, belong to the poor farmers of border areas.
“It is our commitment that atmosphere of peace and tranquillity would be created on the borders so that residents of borders live with peace and can do their agricultural activities without any fear and terror”, Mufti said and added that it was a historical fact that during the tenure of PDP government there was complete peace and calm of the borders.
“PDP, with just 16 MLAs in its kitty, had proved during its tenure how to implement the agenda of peace and reconciliation”, he said and recalled that it was result of PDP’s pro-peace agenda that the then Prime Minister Atal Behari Vajpayee had announced cease-fire on the borders and that initiative had brought positive chances in the lives of common people.
Mufti mentioned towards recent unpleasant incidents on the borders and asserted that PDP preached the message of peace and reconciliation from nook and corner of the State to de-escalate tensions on the borders.
Mufti said that credit goes to his party to take both NDA and UPA on the board to initiate bold steps for restoring lasting peace in this sub-continent. “Through its agenda, PDP restored internal and external peace in this region”, he said.
Mufti said that his party had pioneered a political and economic agenda to establish sustainable peace in the sub-continent and to fulfil wishes and aspirations of all regions and sub-regions of the State.
Reiterating his commitment to focus on border areas to address grievances of the people, Mufti assured that PDP, if voted to power, would conduct on the spot direct recruitment for the unemployed youth of border areas.
Mufti said that PDP would work on a multifaceted programme for socio-economic growth of the residents of border areas who always bear brunt of the hostility between two countries.
“Creation of economic opportunities for border youth would be one of the agenda of PDP in its election manifesto”, he assured.
Predicting that PDP is going to form its own government in J&K, Mufti said that change was imminent in the State and people were looking for an opportunity to give PDP a change to form the new government. “It is writing on the wall that PDP is going to form new government in J&K”, he said and asked the people to ensure victory of party candidates in the coming assembly elections.
Speaking on the occasion, Yuvraj Vikramaditya Singh called upon the support PDP candidate to change the history of J&K. “PDP is the only party which have vision and agenda to address grievances of all sections of the society”, he said and added that PDP has been pursuing the agenda of inclusive growth and justice for all.
“Jammu and Kashmir is passing through a crucial juncture and it is need of the hour that hands of statesman like Mufti Mohammad Sayeed should be strengthened to get the state rid from prevailing chaos and uncertainty”, he said and reminded the people about historical steps taken by the previous PDP led government in J&K to ensure justice with all regions and sub-regions of the State.
Sr leader and spokesperson A Rangil Singh, Media Advisor Nayeema Mehjoor, Shanti Devi, Fallail Singh, Rashid Malik, Vijay Kumar Bawa, Maj Gen (Retd) R S Jamwal, Jitender Bhat, Ch Saleem, Anita Devi, Satpal Singh Charak nad others also addressed the gathering.
SOURCE http://scoopnews.in/det.aspx?q=42262