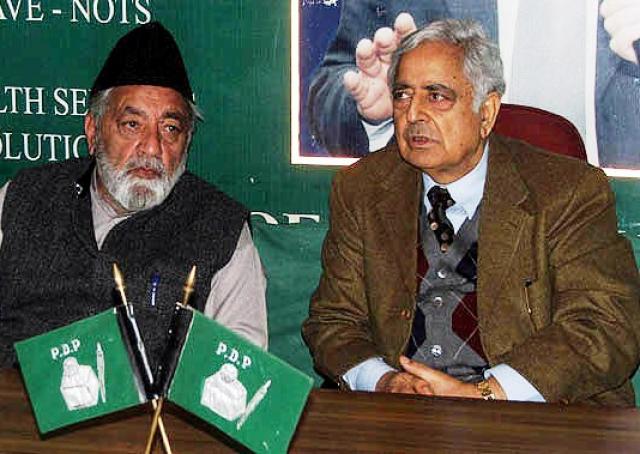 R S Pura/Jammu, April 08 (Scoop News) –    Terming today’s meeting between Prime Minister Dr Manmohan Singh and Pakistan President Asif Ali Zardari as a good beginning,  patron of the Peoples Democratic Party (PDP) Mufti Mohammad Sayeed hoped that this positive development would help in finding pragmatic solutions to a number of issues that affecting relationship between the two neighbouring countries. Addressing public meetings at Langotian and Chak Ahmad Yar villages in border belt of R S Pura, Mr Sayeed said that cordial relations between and were in the interest of the common people of both the countries. He observed that in the prevailing circumstances it was good opportunity to take some bold initiatives to solve all the ontentious issues. “Today’s meeting between Prime Minister of India and President is not a coincidence but a positive development to further improve relations between two countries”, he said and hoped that this meeting would yield substantive results and the process started today would be taken to the logical conclusion. “Although all problems can not be solved in one meeting yet it is good thing that both the countries have now realized that dialogue must be continued to arrive solutions of all the issues affecting the bilateral relationship”, he said and expressed his satisfaction over the joint statement issued by both the leaders after the meeting. “Both and should seize the moment and turn it into a

stepping stone to make substantial progress on all the issues including Jammu and Kashmir,” he said and hoped that Prime Minister Dr Manmohan Singh would visit Pakistan very soon because invitation in this regard has been extended to him by Pakistan President Asif Ali Zardari during today’s meeting. He further hailed decision of both the

leaders to follow up today’s decisions in coming days also. Mr Sayeed said that has already taken the decision to  grant to Most Favoured Nation (MFN) to and this bold decision could redefine the bilateral relations and regional equations in .

He said that such decision would help in strengthening trade relations between two countries. Reiterating stand of his party said that Indo-Pak amity was in the interest of the people of both the countries, Mufti reminded that it was PDP that has pioneered and implemented the peace and reconciliation process in this region. “PDP through its conviction and pro-peace policies had convinced both and to announce
cease-fire on the border”, he said and reminded the people about the historic rally of then Prime Minister Atal Behari Vajpayee at on April 18, 2003, in which Vajpayee had extended hands of friendship towards at that time. “Today residents of border areas are living in peace and it was result of the policies of PDP”, he said.

Pointing towards prevailing situation in , PDP patron said that people of has to play a pioneering role to change the corrupt system. “With the help of people PDP wants to change the present corrupt system”, he said while seeking support of the common masses to launch a war against corruption in the state.
“Aim of the PDP is not to attain power but to change fate of the residents of ”, he said and reminded the gathering that PDP led regime, in its short span of time, had proved its capability to change the system with the support of the people.