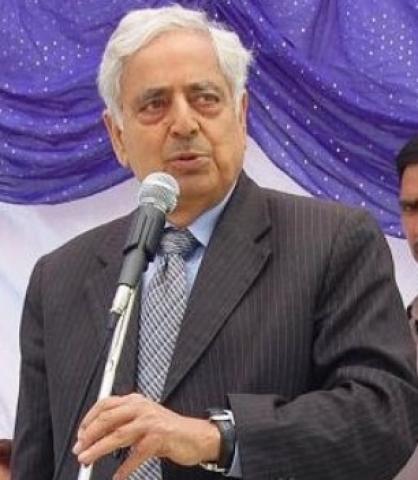 Mantalai/, May 26 (Scoop News) – Peoples Democratic Party (PDP) patron Mufti Mohamamd Sayeed today sought support of the people to change the present inept and corrupt system to bring positive change in the life of the commoners. He said that PDP, during short span of tenure, had proved how a change could be brought about in the life of the people even with a fractured mandate.

Addressing a well attended public meeting here today, Mufti reminded the gathering that PDP led regime had changed the fundamental of politics and administrative system through its conviction and commitment. He especially mentioned various developmental projects which were initiated in this belt during the PDP led regime. “This region remained neglected for decades together and it was only during the tenure of PDP led regime that various developmental projects were initiated”, he said and mentioned towards various comprehensive projects for exploring tourism potential in this belt which were started during that period.

He said that this area-which comprises parts of Udhampur and Ramban districts, has huge potential of tourism so there was a need to formulate a comprehensive policy to development new tourist destinations in this belt. He pointed out that there was an apprehension among locals that after construction of the Nashri tunnel on Jammu-Srinagar national highway this area would be ignored and sidelined. “There is a need to constitute an exclusive tourism circuit for this region connecting all tourist spots like Chenani, Mantalai, Sudhmahadev, Latti, Patnitop, Sanasar, Kud and Batote to develop this belt as separate tourist destination to divert pilgrims and other tourists towards this side”, he emphasized and observed that properly exploitation of tourism potential would change socio-economic conditions of the people. He said that instead of treating this belt as transit tourist destination, this region be development as a separate tourist circuit. He also demanded a comprehensive policy to develop Bhaderwah and famous as exclusive tourist destination to attract tourist from all over the world. He further demanded that adequate infrastructure should be created to develop picturesque area of Kishtwar for mountaineering because that belt has huge potential for mountaineering.

While highlighting achievements of the previous PDP led regime, the process of development was accelerated by formulating a comprehensive development policy. PDP led regime had not only created an atmosphere which was free from fear and terror, the previous government had also opened and up-graded educational institutions, spread network of new roads and many water supply schemes were started in back areas. “This we could achieve with just 16 members in the Assembly and a coalition of many parties”, he said.

The PDP patron regretted that the atmosphere to accelerate developmental activities, which were created by the previous regime, was unfortunately wasted by the present government. It has not only brought to a halt the process of development and political reconciliation but reversed the whole process

Calling upon the party workers to spread message of PDP in every nook and corner of the State, he said “politics of our party is not only to attain power. Aim of our party is to restore lasting peace in this region and to establish a system where every section of the society would get justice and equal opportunities for development and economic growth”.