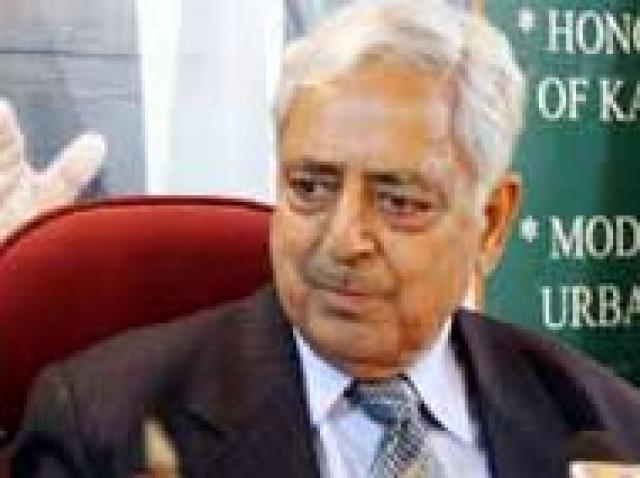 Srinagar, India,April 29 (Scoop News) – Welcoming resumption of highest level talks between India and Pakistan during the SAARC summit at Thimphu in Bhutan, former Chief Minister and patron of Peoples Democratic Party(PDP) Mufti Mohammad Sayeed today Mufti stressed on the need for a Kashmir centric sustained dialogue between the two countries, apart from discussing other problems as this issue, which of bone of contention between the two countries should not be brushed under the carpet. PDP patron also emphasizes on evolving political consensus in the country on the issue because solution of this problem was must for the development and economic growth of the country.

In a statement Mufti today stressed that Kashmir should be focus of the dialogue because people of were in the direct line of fire due to the hostility between the two neighbourers.
“Apart from discussing other problems, Kashmir issue should be discussed through humanitarian angle as residents of this region have
been bearing maximum brunt of the enmity between two countries”, Mufti said in a statement issued here today.
He said that decision of Prime Minister Dr Manmohan Singh to hold dialogue with his Pakistani counterpart Yasuf Raza Gillani was a welcome step which should be appreciated by all political parties.

He expressed satisfaction that both the countries have ultimately realized that there was no substitute to the dialogue and this process should be taken to the logical end to frustrate evil designs of the elements inimical to the peace.
“Instead of sticking to the hackneyed slogans, both the countries should have to adopt to realistic and purposeful policy to resolve all
issues especially the Kashmir problem for lasting and sustainable peace in this region’, he said and hoped that this process should be further accelerated because hostility between two neighbourers was neither in the interest of the two countries nor in the interests of
the people of Jammu and Kashmir. .

“Since friendship with the neighbouring country is inevitable for the growth and progress of entire region, consensus among all political
parties could put the desired pace and power into the process of dialogue”, he observed and called all political groups to rise above
partisan interests.
“To give credibility to the dialogue process there is need to initiate some more Confidence Building Measures (CMBs) especially making the cross LoC trade hassle free”, he said and added that Prime Minister Dr Manmohan Singh should take some concerted steps to keep a check on the violation of human rights in Kashmir.

He said that all political parties should put its full weight behind the latest peace initiative with initiated by Prime Minister Dr Manmohan Singh during current SAARC summit.