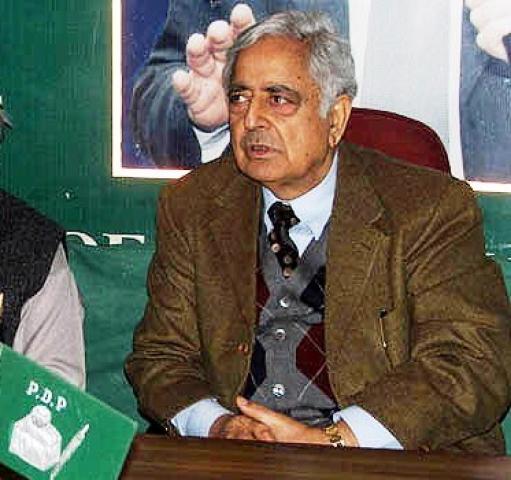 , January 11(Scoop News) –Peoples Democratic Party (PDP)Chief Mufti Mohammad Sayeed today emphasized that political leadership of and must step in to arrest the escalating tension on the borders. Stressing on the need of maintaining spirit of the ceasefire all along the Line of Control (LoC) at any cost he said that peace on the borders was in the interest of the people because they bear brunt of the hostility between the two countries.
Addressing function to welcome prominent political activist of Uri, Sayeed Najeeb Naqui, a senior Youth Congress who joined PDP here today, Mr Sayeed expressed his concern over unpleasant events on the LoC recently and emphasized on the need of taking some concerted steps to avoid reoccurrence of such unfortunate incidents in future. He said that the ceasefire, which was announced on the border by the former Prime Minister Atal Behari Vajpayee in the year 2003, had brought positives changes lives of the common people in Jammu and Kashmir.
“The ceasefire all along the border from Kathua to Kargil had proved to be an very important event not only for the two countries but also for the people in all the regions of Jammu & Kashmir”, he said, adding “For the people of Jammu & Kashmir the ceasefire has brought peace in their lives so I am hopeful the leadership of two would realize the importance of maintaining the spirit of the ceasefire”. He said that leadership of and must act with political wisdom and do not allow the hawkish rhetoric to spoil the gains of the peace process and the ceasefire.
PDP patron said that the ceasefire, had not only given the much-needed relief to the people living along the borders, but it had also laid foundation for initiating the process of peace and reconciliation in this region. “The ceasefire had brought relief and normalcy into the lives of people residing in the border areas,” he said and added that at the same time it also made historic initiatives like opening up of LoC for bus service and cross LoC trade possible.
As large number of people from Uri along with Najeeb joined PDP, Mr Sayeed reminded that opening of Uri-Muzaffarabad road was result of the ceasefire on the LoC. He reminded the rally which was taken out by PDP on April 7, 2004 in which some of the party activists had sacrificed their lives for peace.
The PDP patron said the ceasefire had provided a strong foundation for the amicable resolution of all the outstanding issues including . “Instead of allowing all gains of ceasefire to go waste, political leadership of both and must accelerate the process of peace and reconciliation”, he emphasized, adding, “sub-continent’s security and stability would largely depend on how the leadership of and would behave in the given situation”.
PDP patron said that there was no substitute to the dialogue so the policy of peace and reconciliation started by the PDP must be taken to its logical conclusion for establishing lasting peace in this region.
“I appealed Prime Minister of India and political leadership of to adopt realistic and purposeful policy to establish lasting and sustainable peace in this region’, he said.
PDP patron reiterated that aim of his party was not grab power but to restore dignity and honour of the people. “My only desire to make an of Peace and to establish lasting peace in this sub-continent”, he said, adding “Since its formation PDP has been working to create an atmosphere of reconciliation and to restore a sense of security and fearlessness among the people”.

Speaking on the occasion former Deputy Chief Minister, Muzaffar Hussain Beigh, reaffirmed commitment of the PDP to aggressively pursue the agenda of reconciliation and development in the State.
“As the peace process was pioneered by the PDP, party would take this process to the logical conclusion by establishing lasting peace in this region by channelizing power of the people”, he said.