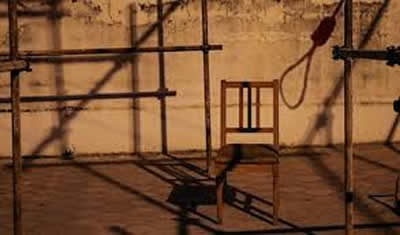 On the Eve of Christmas and following the 62nd condemnation over its gross human rights violations by the United Nations, Iran decided to respond as expected: 16 prisoners in 4 cities were executed in the span of merely 3 days. Despite the fact that such condemnations over the atrocious human rights conditions are quite necessary in reference to the regime ruling Iran, as long as the mullahs sitting on the throne sense the weak appeasement policy adopted by the West, there will be no backing down on such horrific numbers of execution. Many countries in the West have correctly abolished capital punishment altogether. It is high time to make the regime in Iran understand the price for such abhorring measures of mass executions.

A quick glance shows how the mullahs ruling Iran are targeting the younger population in their despicable killing spree of executions. The mullahs have also executed a number of dissidents and political prisoner under the pretext of ordinary prisoners and based on the ridiculous pretense of “moharebe” (enmity with God). Reports of such secret executions never leak to the outside world from the regime’s prisons and dungeons. Iran is also known for executing hundreds of people under bogus drug-related charges.

In the meantime, dozens of prisoners including Barzan Nassrollah, Sajjad Sanjari and Hamid Ahmadi – all under the age of 18 at the time of their alleged crime – are currently on death row. Barzan, a member of Iran’s minority Sunni community that is constantly targeted by the mullahs’ oppression, was arrested back in 2010 when he was in 11th grade. After enduring months in solitary confinement he was sentenced to death under “moharebe” charges. According to his relatives he has “neither killed anyone, nor was affiliated to any specific group or possessed a weapon.”

Amnesty International issued a statement  on December 8th saying Iran has “cemented its shameful status as the world’s top official executioner of juvenile offenders after two young men were re-sentenced to death for crimes committed when they were under 18 years old…Iran’s continued use of the death penalty against persons convicted of crimes committed while they were under 18 years of age is cruel, inhumane and blatantly unlawful.”

Amnesty issued a statement call on December 22nd to save the life of Hamid Ahmadi, an Iranian juvenile offender now aged 24 who was sentenced to death for his alleged crime at the age of 17. In this statement Amnesty also sheds light on the fact that Ahmadi’s trial was unfair as the court relied on confessions at a police station where he did not have access to a lawyer and his family. Ahmadi also protested the fact that the so-called confessions were obtained under torture and other ill-treatment.

Following the 62nd condemnation of the Iranian regime on December 17th Mrs. Maryam Rajavi, President-elect of the Iranian opposition umbrella group National Council of Resistance of Iran, called for senior Iranian regime officials to be held accountable for their crimes against humanity. She went on to emphasize this is a necessity to respect the vote of the international community in condemning systematic human rights violations in Iran.

It is very important to remember that we are dealing with a medieval regime ruling Iran that understands the rule of actions speaking much louder than words. The international community must unite to hold the Iranian regime accountable and make it pay for its abysmal human rights record.

Moreover; Mrs. Rajavi, in her Christmas message, wished that the message of compassion, freedom and tolerance would engulf the region and the world would get relieved of tyranny and fundamentalism and have a new birth and revival. She called on the world community to form an international front against the religious dictatorship in Iran and its proxies and militia in Syria and Iraq and to fight Islamic extremism, the enemy of true Muslims, Christians and all followers of other divine religions.