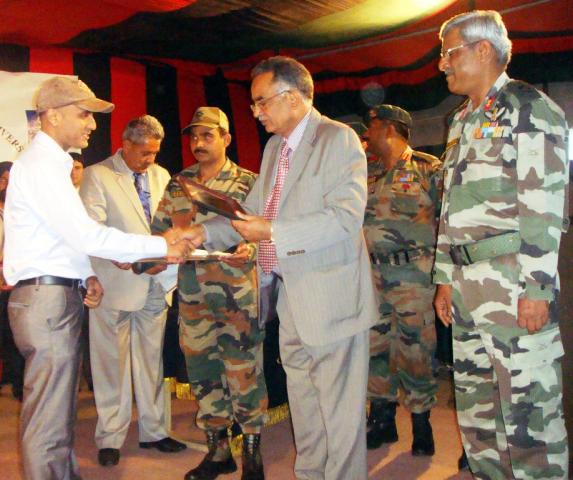 Rajouri/Jammu, April 16 (Scoop News) –In order show the ways of job portals for the University scholars, Baba Ghulam Shah Badshah University and Indian Army held a Technical Seminar cum Career counseling in the University campus in which 20 national & Multinational corporate houses representatives gave presentations on their company profiles. The programme also witnessed a career counseling for various institutions.
The programme was aimed at providing opportunities to the University students in various sectors by showing them various means to enter into the jobs. Vice Chancellor Prof Irshad Ahmed Hamal inaugurated the Seminar and presided over it while General Officer Commanding of Romeo Force Maj. Gen. I Narayana was the chief guest. Prominent among others , Registrar BGSBU Mohammad Rashid Chowdhary, Dean Academic Affairs Prof AK Koul, Principal College of Engineering & Technology Prof M Asgar,  Special Secretary to VC Suneet Gupta, Principal University Polytechnic Col KK Dogra senior officers of University, faculty members and scholars were also present.
The programme initiated with recitation of Quranic verses followed by University Tarana presented by the University scholars. The corporate representatives delivered impressive lectures and inspiring talks who from from multinational companies like HCL, Konkan Railway, BSNL, National Highway Authority of India, ONGC, Hindustan Construction Company, ACCORD Communications PvT Ltd, Tadiran Telecom, juniper Networks, NEC, Schneider, D-Link, Pioneer Engineering, Border Road Organisations and Mughal Road Project. A talk was also held by representatives of the Army on various entry schemes for joining Indian Army, Navy & Air Force.
On the occasion General Officer Commanding of Romeo Force Maj. Gen. I Narayana said that Army is serious to engage the dedicated youth in its cadre. He said that not only in Army, they are also helping the youths under operation Sadbhavana in getting jobs in the corporate sector by organizing such career counseling programmes. He also announced to organize annual placement programme in this University by bring corporate representatives in the University.
Thanking Indian Army for collaborating the programme, Vice Chancellor Prof. I. A Hamal said that the Seminar will help the passouts of Baba Ghulam Shah Badshah University in getting jobs in various corporate sectors besides army. He said that various University  passouts have already joined Army and corporate world. He said that the University has intensified its activities of placements. “We have fully functionalised Placement Cell and are regularly providing training & exposure to the scholars for improving their communication skill and other personality traits so that they don’t face any problem in getting jobs”, VC said adding that a reputed company has recently appointed 9 scholars of MBA on the post of Channel Managers and efforts are on to get others placed.