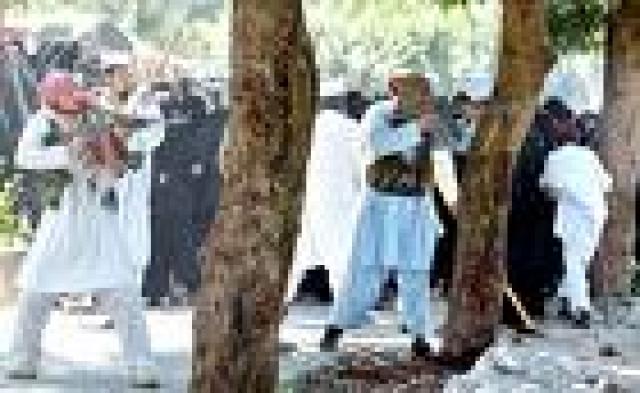 Saeed Minhas
Islamabad: Amidst total confusion on the civilian half of government and the suo moto action by Supreme Court, President Gen. Musharaff seems to have halted the military half of government from storming the Lal Mosque and instead sent Chaudhary Shujaat to negotiate with besieged leaders of mosque to bring a less bloody end to the siege which entered in to its eighth day on Monday.
Apparently a last ditch effort was made by the government by sending a delegation of federal ministers, Ulemas and social workers led by president Muslim league (Q), Chaudhary Shujaat Hussain to lure the besieged administrator of Lal Mosque Ghazi Rashid out of the mosque premises on the pretext of negotiations and taking away the injured and dead bodies from the twin seminaries.
The high powered and fully guarded motorcade of the delegation reached the surrender point near Melody Food Market and had contacts with Ghazi Rashid by using mega phone and mobile phones but deadlock remained intact as neither delegates nor Ghazi Rashid were ready to enter into each others territory. Delegates kept asking Ghazi Rashid to come out of the mosque because going inside the mosque was neither in the plan nor was advised by the security forces while Ghazi Rashid refused to be lured into stepping out of the mosque.
The delegation was formed after intense negotiations of Ulemas of federal government funded Wafaqul Madaris with the President, Prime Minister and Chaudhary Shujaat Hussain throughout the last two days. The intervention of Supreme Court in the matter helped Ulemas cause as well. Ulemas have been asking for providing them access to Lal Mosque to meet Ghazi Rashid and bring out any wounded or dead bodies out of the two besieged seminaries.
The MNA of MMA Shah Abdul Aziz and renowned social worker Abdul Sattar Edhi were not allowed to go near the mosque by Rangers owing to firing from within Mosque. However, Shah Abdul Aziz claimed that he was stopped from going near the mosque because of firing from Rangers and not from within the mosque. A group of about 20 lawmakers from various configurations also tried to go near mosque today but since the firing intensified right at that very moment, they too were not allowed to cross the surrender point.
Meanwhile, the siege sparked an anti-government protest Monday by some 20,000 tribesmen, including hundreds of masked militants wielding assault rifles, in the northwest region of Bajur.
Many chanted "Death to Musharraf" and "Death to America" in a rally led by Maulana Faqir Mohammed, a cleric wanted by authorities and who is believed to be a close lieutenant of al Qaeda no. 2 leader Ayman al-Zawahri.
"All of Musharraf’s policies are against Islam and the country; therefore he has become our enemy. He will not be spared and revenge will be taken against him for these atrocities," he said. "Innocent scholars and students are being martyred, mosques are being ruined only to please America," he said.
The battery of government ministers kept reiterating that many wanted Islamic extremists were inside the mosque. Officials conducting the operation revealed on condition of anonymity that telephonic intercepts have shown that there are people with links to various defunct Islamic extremists orgiantsations holed up inside the mosque. They said that tips have been given to various agencies for following up on the telephonic contacts.
Curfew Continues:
With the exception of two 2-hours breaks, curfew continued to keep the vicinity of Lal Mosque in its grip. Not much was heard or witnessed in the afternoon of Monday, especially after the news that Supreme Court ahs jumped into the issue by taking a suo moto. Light firing was heard in the morning while some heavy firing was also heard in the wee hours of Monday as well.
Residents kept locked inside their abodes while security forces were seen moving around and setting up new bunkers on various roads leading towards Lal Mosque. Security was beefed up in the danger zone as well as in the surrounding streets when the motorcade of the delegates led by Chaudhary Shujaat arrived near the surrender point.
Various residents, when interviewed during the curfew breaks revealed that living without electricity, water and natural gas is something unbearable. They were unanimous in calling upon the government to bring an end to the lal Mosque issue one way or the other. They said that they have become sick of the situation and want an early solution.
Many of them complained that during the curfew breaks, shopkeepers are charging exubritant prices and government should do something about this. They also demanded that electricity and natural gas supply should immediately be restored in the area so that aged and patients can find some relief in this sweltering month of monsoon.
Students missing:
More than 65 female students of Jamia Hafsa have had no contacts with their parents since the start of military operation against Lal Mosque and Jamia Hafsa. Sources revealed that parents of these female students are waiting outside the red zone in the hope that administration would let them go inside to trace their missing girls. These parents claim that neither the mosque administration could find them inside the seminary nor the government agencies are giving any clue about the whereabouts of these girls.
Sources said that no serious efforts has been made by the district administration to compile a list of such missing girls and neither there has been any word of consolation for the waiting parents.
Meanwhile, it is learnt from the Lal Mosque sources that more than 94 students have been buried in communal grave inside the mosque. The mosque sources said that except for 26, all the rest have been buried as per their last wishes inside the mosque compound. However, government officials said that they did not have any such information.
Filed under: World
Share Tweet Pin G Plus Email
previous article: Roots of Lal mosque confrontation
next article: Amitabh Ghosh’s Hungry Tide