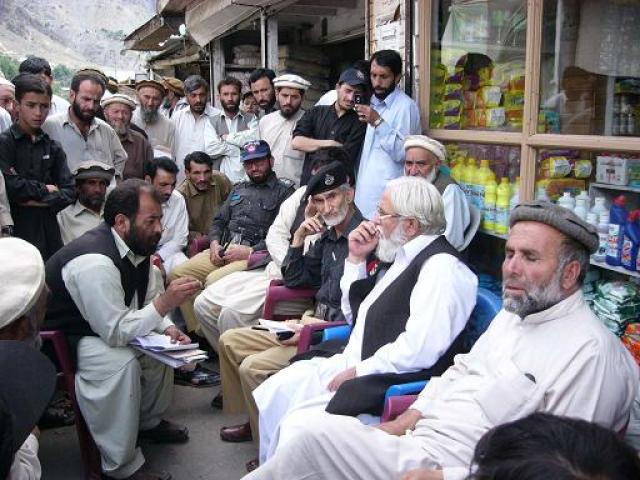 CHITRAL: Mutahida Awami Committee Drosh set in  protest on main Peshawar Chitral road continue for the last 6 days. They have pasted their demands on different squares and walls of the area. The committee is leading by Irshad Mukarrar chairman of the committee and a well-known politician of PPPP Sherpao group. They demanded for monitoring of NGOs especially banning on Legal Awareness Program for Human Rights (LAPH) funding by Trocaire an Irish based NGO who involved in spreading of obscenity, un-Islamic and non civilized activities against Chitral culture. They alleged that they play a role of broker (middle man) for the sack of a few pennies and violate dignity of Chitral. They urged for banning of women activities. They also warned the administration that LAPH is involved in spreading obscenity in the area on the name of human rights the NGO must be banned otherwise they will take stern action they warned. Iqbal Hayat communication secretary of Pakistan Peoples Party Malakand Division also disclosed this scribe that LAPH involved in so many negative activities. He said that actually Trocaire an Irish based NGO has released fund to Legal Aid Forum for Human rights but some people established an other NGO on the name of LAPH and transferred its fund to new NGO and they also changed their account illegally. He said that most of its cabinet members and Board directors are government servants and they working their illegally. Even Chairman of LAPH also employee of AKRSP (Aga Khan Foundation) but even than he working as Chairman of LAPH he also demanded for conducting an inquiry in this regard and to ascertain that where they spend such a huge fund in million.

Mutahida Awami Committee demanded for re-posting of inspector Ghulam Qadir as SHO back to police station Drosh because he is a honest officer and solving problems of Drosh area locally. They demanded for establishment of Wapda (PESCO) sub office at Drosh, and urged on provincial government to for construction of Mother and child health center at Drosh immediately they known that  its fund has been shifted to Garamchishma illegally. They demanded for fulfillment  of vacant posts of specialists doctors at civil hospital Drosh established in 1929 and urged on launching work on Drosh water supply scheme. Up-gradation of government girls middle school Arandu, Ashriat, Jinjirat Koh, Sheshikoh, Kaisu, Potanyan Deh and Shah Nigar urged because there is only one girls  high school at Drosh for 80000 population. They also demanded for conducting inquiry against National Highway Authority for using substandard quality material in maintenance work and extension and blacktopping of road they use muddy crush without laboratory test. They demanded for giving punishment to NHA staff and contractors who involved in these practices.

MAC urged on extension of PTV transmission because there is only PTV home and no other news channel. They demanded for shifting of NADRA office to veterinary hospital Drosh having great capacity in its building. Establishment of boys and girls Degree College also demanded by the committee. They also demanded for budding (auction) of seized timber lying at forest department rest house and to be sold it to local saw machines and car painters and urged banning its transportation out of Chitral with a wrong way. The action committee especially demanded from the administration and government for monitoring Non Government Organizations activities as some of them involve in non cultural and non Islamic activities and obscenity they urged on government and donor agency to ban Legal Awareness Program for Human Rights (LAPH) who involve in obscenity and anti activities on the name of human rights. Talking to this scribe Irshad Mukarrar chairman of Mutahida Awami committed warned that if our genuine demands were not fulfilled we will be compelled to take stern action as well as blocking of road and hunger strike.

Chitrali girl died in mysterious way at Abbotabad. Parents alleged for killing the girl with aggression.

CHITRAL: A young girl Asman Pari daughter of Ghazan resident of Gawuch village Sheshikoh valley Drosh Chitral who has married at Nawan city Abbotabbad a month ago was died with a mysterious way. Parents of the girl alleging that she was killed by her in laws with aggravation on the girl. One of her close relative Ameeruddin son of Mirza Khan of the same village told this scribe that a month ago Sikandar of Sarbhand Abbotabad came to our village and said that he want to marry a girl for his son living at Karachi namely Irshad. He said that an other boy was also with Sikandar who was actually Irshad but Sikandar denied that he is not Irshad and actually Irshad is serving in Karachi. Hence when the girl was married and was shifted to ancestral town of Sikandar an other man came there and Sikandar told the girl that you have been married to this one. The girl refused because she was shown  an other man not this one. Ameer alleged that they injected intoxication to the girl and most of its time she remain unconscious. They also beat her aggressively he alleged and she died within one month. He said that her laws not handing over her dead body to her parents and we approach to elites of the area and then we get her dead body who was laid to rest at her village at Chitral. Parents of the girl alleged that she was murdered by aggravation and demanded for conducting of judicial inquiry in this regard.

When this scribe contacted police station New city (Nawa shihar) Abbotabad SHO Azam Ali Shah said that they have lodged report on the complaint of Irshad husband of deceased Asman Pari that she was ill from the very beginning when she married and also remain admit (for indoor treatment) at Complex hospital and died by natural death on account of her illness he said hat autopsy ( postmortem)  report also is nil and not showing any aggravation hence he said that we still waiting for laboratory repot and on receiving of the Laboratory report police will take further action.