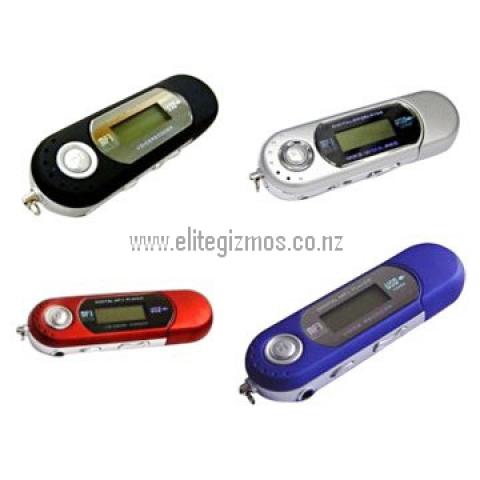 CSIRO has built a shirt that allows you to play air guitar and actually hear music! Dr Richard Helmer and a team of researchers at CSIRO Textiles and Fibre Technology in Geelong have created a ‘wearable instrument shirt’ (WIS) that consists of a wearable sensor interface that uses custom software to map gestures with audio samples. The WIS works by recognising and interpreting arm movements – no wires! This technology is adaptable to almost any type of apparel and they have also made air tambourines and an air guiro, a percussion instrument.

The Flying Alarm Clock is the best idea for those people who literally need to pushed out of bed in the mornings. At the sound of the alarm the spinning piece takes off into the air and flies around the room making a high pitch annoying noise, until as you stumble to try and put it back on the base. And if you hit snooze you can repeat the whole process again, unless you decide to smash it to shut it up. It is available from BoysStuff.co.uk for about $35.

Christmas Tree Made From 2000 CPUs

In Japan’s Akihabara district, Christmas has come early and can not be complete without an electronic twist. The 5.2 meter tree is decorated with 2000 processors, including the latest Core 2 Duo speed demons. The tree will be on display at TX Akihabara station till December 25th.

The TrekStor i.Beat Organix Limited Edition Gold MP3 Player was a custom order from Russian-Canadian billionaire Alex Shnaider. The piece boasts 63 diamonds and is cast in 18-karat gold. The music player has 1 GB memory, can playback MP3, WMA, WAV, ASF, and OGG file formats, has two headphone jacks and a radio, alarm clock, stopwatch and voice recorder. Price-tag: $19 999.99. You can grab your own from Amazon.com. Hurry before they’re all gone!

PlayAway Books are like little iPods that contain books such as John Grisham’s “The Broker” and Dan Brown’s “The Da Vinci Code”. They come with ear buds and a lanyard to wear around your neck so people can still see what you’re reading or in this case listening to. I’m still a fan of regular books, but these would be good for traveling.

Do You Weigh More Than King Kong?

Since we already compare ourselves to celebrities, why not purchase the Celebrity Weighing Scale–a scale? I mean there’s no need for numbers, all you need to know is are you the same as Paris Hilton or Oprah. It’s much easier that way. It’s available at The Angry Store for 35 Euros.

The makers of Dogbuns started making hot dog costumes for their small dogs for an annual parade, but decided to build a website and started selling these costumes online after receiving lots of attention from people. The suits are made of a soft, lightweight molded foam and contain two strips of velcro that attach to the elastic harness. Each costumes weighs about 18-20oz and will cost around $50 with delivery. Order yours for Halloween soon, but I’m sure your dog will hate you for it!

For all those obsessed Sudoku players now you can even play in the bathroom on your toilet paper? That’s right it’s the world’s first Sudoku Toilet Paper Roll. It costs $13 for approx. 240 playing sheets.

The Hyanide – A Bike/ Snowmobile/ 4X4

The Hyanide, which is a bike, a snowmobile and a 4 X 4 hybrid is currently only a design concept and a one-fifth scale model. The main feature is the tank-like thread that consists of 77 identical segments held together by Kevlar rope. Not only does this feature help with traction, but it would allow the vehicle to corner much better than a motorcycle.  The Hyanide would have a top speed of 85 mph, could seat two and would be powered by a 60hp 500cc liquid-cooled single-cylinder engine. Let’s get this into production people.

Instead of putting yourself at risk of electrocution, you can play it safe and still be able to watch a movie or the game in the shower or bath with Aquavision TVs. They are designed to withstand moist or humid environments. All Aquavision TVs have heated screen to avoid fogging up in humid conditions or freezing in cold conditions. They even come with a floating, waterproof remote control. The super-slim units blend seamlessly into the wall and come in a variety of sizes and 5 different glass finishes.

A stylish and practical ring? The Spiced Lady Ring, designed by Chao & Eero Jewel, is a combination of both. The 1.35-in. high ring is crafted from sterling silver is definitely a conversational piece. The kicker is the ring is actually a salt/seasoning shaker and can become a free-standing sculpture when it’s not in use. A small rubber stopper on the underside of the ring allows it to be filled with salt or other seasonings, so if you require a bit of extra spice you now have some at your fingertips. Price: $34

LG Fridge With Built in TV – Life is Good

No frost, low noise level, refrigerator with a 13” TFT wide LCD TV with remote control. Who cares about no frost or noise? It has a TV on the door. I’m sold.

The Sky’s the limit

Well I think I’ve seen it all now-a ghost detector? So apparently if there is a ghost in the area, the button will light up. You can clip this little radar detector to your cellphone, backpack or key chain. Just imagine this could be yours for only $18.

Carbon is an extremely light and strong material so it would make sense to create an ultra luxurious racing bike with it. And that’s exactly what Mercedes-Benz has created. The new Carbon bike is the highlight of the 2006 Mercedes-Benz bike collection and can be yours for $3665 US. Oh and it also only weighs a mere 8.3 kilograms.

Fall in love with Nokia

Nokia’s L’Amour collection introduces the 7380. A phone that will definitely turn heads with its fusion of leather materials, etched metal and quicksilver surfaces. Not only is it extremely fashionable, it also boasts many features. It comes complete with an integrated music player for MP3/AAC/M4A formats, FM stereo radio and a 2.0 megapixel camera with up to 4x digital zoom. Now I’m not quite sure where the key pad is and how difficult it will actually be the use the phone to make a call, but it looks hot.

This is probably the best chair ever! Who doesn’t love sunbathing in a pool? Now it gets even better with the motorized pool lounger. It propels you around the pool with two quiet motors controlled by two joysticks to ensure the best tan. It has a built in cup holder for all those martinis and it can hold up to 250lbs! Girls I wouldn’t tell your man about that part, he’d never get off! Only downside is it requires 12 x 1.5 volt D-cell batteries. I think the next model should be solar powered.