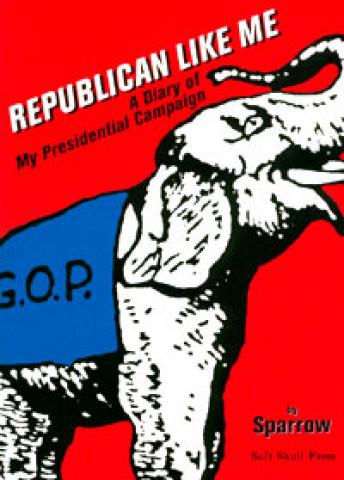 I have run for President of the United States four times: in 1992, with the Pajama Party; in 1996, as the only Revolutionary Communist within the Republican Party; in 2000, on the Ear Of Corn Party ticket; and in 2004, again as a Republican (and when I lost the nomination, I founded the RealPublican Party).

Today I am running once more, this time on the Sudoku For All ticket.

(You may be asking yourself: "Why the Ear Of Corn Party?"  The answer derives from
an exhilarating letter to the Science section of The New York Times from Nancy A. Ransom, who wrote: "In the summer of 1952, when my husband and I lived in Princeton, N.J., a friend told us that corn grows so fast you can hear it. So one night we all went out to a corn field and lay down under the stars, listening to the ears of corn pop and crackle as they grew.")

Incidentally, I have consistently implored my followers (if there are any) not to vote for me (except in extreme circumstances: e.g. in the Republican primary).  And I have succeeded, as far as I know.  Every so often, a half-drunk person a party approaches me, announcing: "Hey, Sparrow!  I voted for you!" — but when I grill the party-goer, she admits that she is kidding.*

And you, fair Reader of this discourse, I implore ye: vote for the Democrat!  I know this entails faint humiliatWhenhtly better world.  In the meantime, you may "support" me, by slapping the enclosed stickers on illegal surfaces, and telling your coworkers: "You know, that fellow Sparrow has some intriguing blueprints for a less coercive society!"

How did I inaugurate my Presidential sally this year?, you ask.  Here’s the story:

The campaign had begun quite early.  Hillary Clinton has been running for about three years.  Numerous Republicans, with unlikely names like Sam Brownback, Tom Tancredo and Mike Huckabee, were in the race.   I must find the right moment to announce my high intentions.  But when?

Then my friend Frederick Wasser, Ph.D., renowned professor of media studies at Brooklyn College, sent me the following article from the Guardian Unlimited:

An unexpected visitor dropped by the White House’s Rose Garden yesterday to offer a crude yet succint opinion of George Bush by relieving itself on the president’s sleeve while he was addressing reporters.

Giving one of his rare presidential press conferences since becoming the US leader in 2000, Bush was busy defending the beleagured US attorney general, Alberto Gonzales, when the avian heckler swooped by to deliver its whiter than white verdict.

The bird is yet to be formally identified, some say it was a pigeon, others, a sparrow, perhaps it was a lesser spotted sparrow-pigeon, who knows; but its contribution to the proceedings was brief and to the point.

Ever the urbane sophisticate, Bush merely noted the deposit and wiped it into his sleeve with his bare hand without breaking stride, breath or his assault on the record for mentioning al-Qaida the most times in one briefing.

Here was the opening I’d been searching for!  I quickly fired off the following e-mail, to my closest associates:

Gentlemen and gentlerwomen, I have been awaiting a sign, and now it has appeared!  A heroic bird has loosed her bowels on George Bush!  Like Mr. Bush, I look to the Heavens for guidance. If that flying being — quite possibly a sparrow — can shit on our Chief Executive, so can I!

The time is right to announce: I, myself, am running for President of the United States!

That same day, by coincidence, I wrote the following sonnet (which rhymes almost perfectly, may I point out):

Rip out all your metaphors, O
tedious American poets! Who
needs to hear that a drunken woman "swayed
like a stalk of barley"? First of all, be
honest — have you ever actually
sat and watched a stalk of barley? I’m afraid
not. You are no Ovid. You don’t know shit
about nature. The things you really know
about — shopping at Target, going to
your health club — you believe wouldn’t fit
in verse. Why? Because they aren’t enough like
that over-civilized fascist, T. S.
Eliot, and his 10,000 much less
elegant wannabes (who all sound alike)!

My campaign was now firmly underway!  I was the first Presidential candidate in history (to my knowledge) to firmly attack metaphor!

How will my campaign develop?  Be sure to follow it in the pages of LUNGFULL!

*Which is fortunate for me.  I do not wish to spend eternity crouched in Hell next to Ralph Nader.

Filed under: Opinion, Politics
Share Tweet Pin G Plus Email
previous article: The Navajo Indians: a Closer Look at their History, Culture, and Way of Life
next article: Arsernal Vs Ac Milian In Champions League