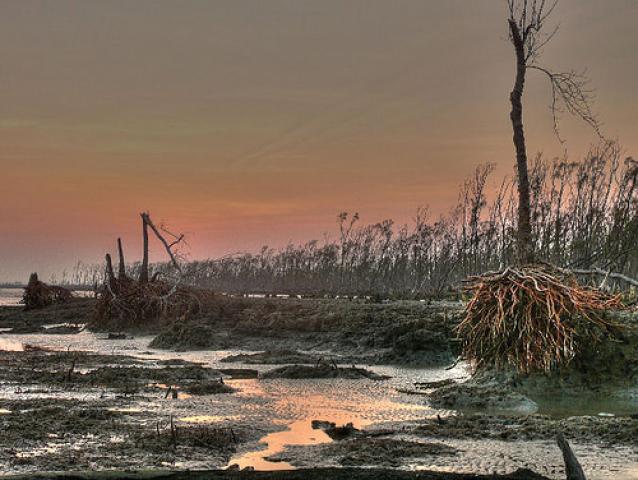 First, an update on the situation in Myanmar after Cyclone Nargis hit the country a few days ago. The death toll continues to rise. The official report on the number of casualties is way below international estimates. The government is still placing the number of dead people around 23,000 while international aid groups believe the figure could now reach 100,000.

Golden Colour Revolution hints the death toll could be worse:

“According to an undisclosed interview with one government official, death toll is reaching 600,000 so far and 100,000 still missing. According to his figure, 180,000 were killed in Lutbutta township alone. 90,000 in Phyar Pone Township; 80,000 in Bogalay Township; 50,000 each in KywanGanKone, DayDaYae and MawKyane Township.Authorities. Army and its thugs are throwing away dead bodies to the nearby river. Even in Ye Way Cemetery in Yangon City, dead bodies are cremated in batch without proper identification. Emphasizing to Phyar Pone Township, authority declared an Emergency Act.”

Bangkok Dazed received an e-mail from an expat friend living in Yangon, Myanmar. Below is a short description of how people in the residential city are coping with the situation:

“In our house we were trapped when tress around the house fell over after 11 hours of strong winds at 200-240 knots. The mess is terrible everywhere, with all electricity down and no water for days. Our home/office phone lines are down including all power lines. I am here today at the internet café. This area on Mahabandoola Street is open again in downtown Yangon, as they had underground wiring and cables. All the rest of us who live in residential areas and in the city are left with no power. We are looking at 3 to 6 months, or maybe 1 year to get power again! To add more stress, all food and water has gone up 3 times the price. As each day goes by, the price of generators go up; we paid $2,000 for a generator that is usually priced at $900 to $1,200. So it’s really bad. All of us are unhurt, but we are still coping with this situation.”

Now, let’s discuss the status of the relief work in Myanmar. The ruling Junta is still restricting the movement of international relief groups. Soe Moe enumerates the services and goods needed by Myanmar today:

“It’s been 6 days since the cyclone Nargis struck Myanmar and the situation is getting worse day by day due to the decomposed animals and human lying around the effected areas. Recent days, we had witnessed the generosity of the world as the humanitarian aid in millions of dollars. But it is very sad to find out that Burmese government is hesitating to grant visa to UN aid workers and NGOs in the name of politics. It is not the time for politics during the time of humanitarian crisis. And it is very sad to hear on news that the western nations are willing to provide the aid needing by the cyclone Nargis victims while Burmese government is refusing to accept them.

“Today first UN aid plane has landed in Yangon International Airport after 2 days delay due to the visa issues. And more planes are waiting permission from Burmese government to land in Yangon. Italy, Thai, India and Indonesia aid planes had been allowed to land in Yangon. We have seen the death toll increasing dramatically over the days.

“What we desperately need is experience aid works and rescue units to help the survivors, to dispose the dead bodies properly and to control the deadly diseases. We need helicopters to go to the most remote areas where the aid is greatly needed. In Burmese air force, we have limited numbers of helicopters and they won’t be able to help those from remote areas. US military is offering aid mission. The US airbase in Thailand is ready to send its helicopters and ships to Burma for search and rescue mission. And again, Burmese generals are not going to accept the offer because they are Americans. This is not the time for like or dislike. This is the time to save as much people as we can.”

The blogger is also horrified to see the dumping of corpses in the rivers:

“I was so surprised to see that dead people being dump into the rivers. I’m wondering what they are thinking. It won’t solve the problem by throwing the dead bodies in to the river. In fact, it will endanger the people who are living along the river bank with deadly diseases.

“In a matter of days, the death toll will increase again. This time it is not going to be devastating force of the cyclone Nargis, but it is going to be the poor health care and reluctance to accept the aid workers around the world by the generals of Burma. And this time the government will also be responsible for the dead of tens of thousands of Burmese in Burma. Their ignorance to the early warning of the cyclone Nargis and reluctance to accept the aid from around the world will be the main cause of people dying in our country. And we will never forget how people are being killed during 1988, September 2007 and May 2008.”

Bangkok Dazed insists giving aid should not be politicized:

“If the USA, or any country, wants to offer humanitarian aid, I think that is wonderful. But the aid shouldn’t come with strings attached, or accompanied by lectures. Just help the people that need it, and keep your political and religious agenda to yourself. But that seems to be an impossible task for the “holier than thou” contingent. You would think those idiots in the Bush administration would “get it” by now. But no, they continue their same style of inflammatory, derisive diplomacy; criticizing and ridiculing other countries, rather than making a sincere attempt to engage in constructive dialogue. That means sitting down and talking to the other country, not lecturing them and calling then bad names.”

Beyond SG advises the Junta to learn from the Chinese government:

“Aid is pouring in from all over the world. The bottleneck is the damaged infrastructure which was not very good to begin with. Initially suspicious of foreign assistance, the Myanmar Government is cautiously opening its door to outside help. This is a major test for the military government. If it rises to the challenge, its standing in the eyes of the citizenry will go up. The manner in which the Chinese leadership responded to the unusually cold weather during the Chinese New Year period this year earned it widespread praise.”

Asia’s Perfect 10 is looking for the intervention of the Association of Southeast Asian Nations (ASEAN):

“Close to 5 days after Cyclone Nargis struck Myanmar, ASEAN has yet to mobilize anything to aid Myanmar. Thailand and Indonesia have pledged something. Good for them but ASEAN is reacting really slow to aid one of its member states.”

The Junta really suffers from low reputation. Even international relief campaigns are assuring the potential donors that the relief goods will not be directed to Myanmar’s government. Melody’s quotes a sample of the relief campaign information drive:

“You can provide immediate, direct relief to Burmese cyclone victims. The relief will go entirely to the victims. These will not be sidetracked by government agencies, politics or administrative siphoning.”

“A well-known regional Myanmar Blogger, Nyi Lynn Seck, from Yangon (Rangoon), Myanmar, has volunteered to go to the affected regions of Irrawady Delta to distribute food, medicine and other relief supplies.”

Ko htike’s prosaic collection describes the military generals as shameless after they were caught replacing the labels of aid boxes from Thailand. The Burmese Ruby Diary is disappointed that some commentators are writing that the cyclone was a punishment for Myanmar. Little Myanmar compiles an international aid contribution list.

Filed under: Health & Science, World
Share Tweet Pin G Plus Email
previous article: China: EV71 Outbreak in China Sparks Criticisms
next article: Brazil and Orkut: Made for Each Other?