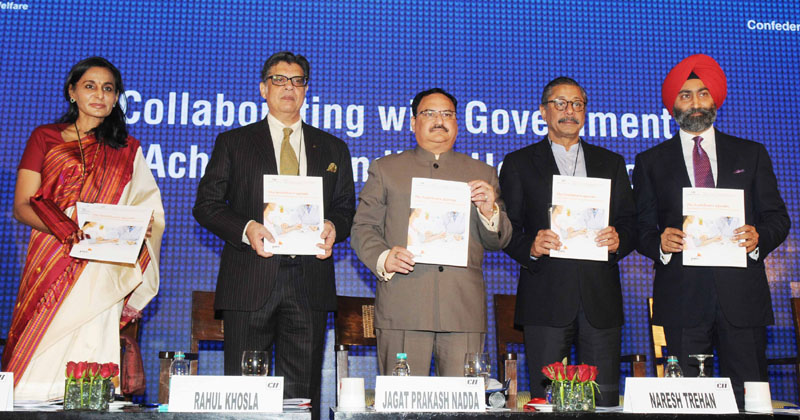 The Union Minister for Health & Family Welfare, Mr. J.P. Nadda releasing the ‘The healthcare agenda’ at 12th India Health Summit, organised by the CII, in New Delhi on December 10, 2015.

New Delhi (PIB-GR-TYP-BIN): “In spite of several challenges in the health sector in the country, our vision is to provide universal health coverage i.e. ensure universal access to quality healthcare that they need without financial hardship for our citizens”. This was said by Mr. JP Nadda, Union Minister for Health and Family Welfare at the 12th India Health Summit, an annual flagship event on healthcare, organized by the Confederation of Indian Industry (CII) on December 10.

Speaking on the occasion, the Health Minister said that today’s event gives us an opportunity to strengthen partnerships to move towards our common goal of providing equitable and affordable healthcare of quality to all. The Health Minister announced setting up of a Special Task Force comprising the of Ministry and the private sector representatives to further deliberate on the further contours of such partnership. He said, “We have been in constant dialogue with the industry on health issues for so many years and now the time is ripe for us to move forward. I assure the Government’s commitment to promote effective public, public-private and civil society partnerships, building on the experience, expertise and mutual trust. I also look forward to this Summit throwing up concrete suggestions and action plans towards collaborating with government to achieve out health goals”.

The Minister highlighted some challenges in the health sector such as like variation in health facilities between urban and rural areas, variation between public and private health services and issues of regulation regarding health activities. Concentration of health services in the southern and western parts of the country don’t match in terms of health delivery system as well as health infrastructure with the northern and central regions. The North-Eastern and the Central tribal areas also need attention, he added. The Health Minister said generally the focus lies on secondary and tertiary but primary healthcare also needs more attention. Paucity of human resource in health, inadequate infrastructure, poor logistics and supply chain arrangements to ensure essential drugs and supplies continue to be areas of concern, the Health Minister added.

Mr. Nadda said, “We need stronger partnership to achieve the target under the Sustainable Development Goals (SDGs) to ensure healthy lives and promote well being for all by 2030. The country is broadly on track to achieve the three MDGs related to the health Sector.” Enumerating the recent notable achievements of the Ministry, the Health Minister said that with “Mission Indradhanush” (which is the world’s largest immunization programme) the full immunization cover has increased to 65% while the aim is to extend this 90% by 2020.

Mr. Nadda said that the National Health Mission (NHM) and Mission Indradhanush have very significantely contributed to strengthening health systems in the country. Since inception, a total of over Rs. 1, 34,000 crores have been released under NHM. The Health Minister further stated that the India Newborn Action Plan (INAP) aims to will bring down newborn deaths and still births in single digit by 2030. The recently launched IPV as part of Routine Immunization Programme will also play a major role in preventing child mortality. The Health Ministry is planning to launch vaccines like for Adult JE, MR and Rotavirus soon, he added.

The Health Minister informed that the Government has taken some major policy decision in its fight against HIV-AIDS. He said that in view of the growing need for treatment services, the Ministry has decided that the cut-off level for initiation of Anti Retrieval Therapy (ART) will henceforth be a CD4 count of 500. With this decision an additional 1 lakh persons will start getting benefit of treatment.

Mr. Nadda invited suggestions from the private sector for the draft National Health Policy. These suggestions will enable it to become holistic and truly meaningful, he said.