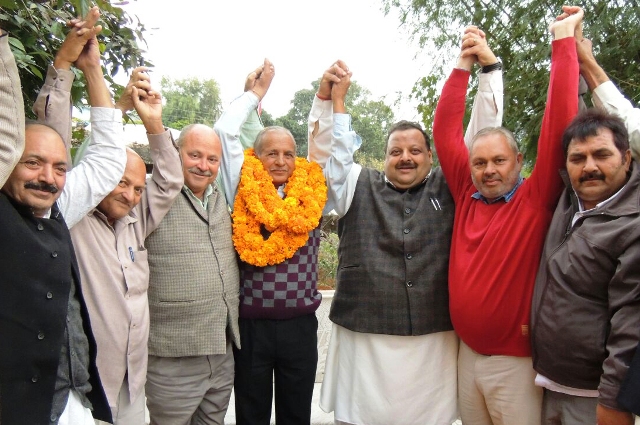 Nagrota,November 24, (Scoop News)- Vowing to represent the genuine aspirations of Nagrota in every forum, National Conference candidate for the constituency Devender Singh Rana on Monday said the injustice meted out to the area due to lack of genuine representation will be undone by highlighting various issues and pursuing the agenda of inclusive development.
“We have chalked out an agenda for Nagrota, which will be accomplished within specific time frame”, Mr Rana said while addressing an election meeting at Surinsar.
The occasion was marked by the joining of Jagdish Kumar Khajuria, a prominent BJP leader and educationist, into National Conference along with his supporters. Mr Khajuria reposed his trust in the party and Mr Rana, saying he and his supporters were convinced that the area will get its right place in the socio-economic profile of the state with right representation.
Welcoming Mr Khajuria, the Provincial President said he will ensure Nagrota getting special dispensation for its development. Despite being in the close vicinity of the capital city, the area has not got the exposure it ought to have, he said, adding that though a modest beginning has been made during recent years yet the tempo needs a big push to transform it into a model constituency.
Mr Rana appreciated the vision of Mr Khajuria for Nagrota, saying he was overwhelmed to hear that he and his associates had got moved by his commitment to upgrade Nagrota as Nava Jammu. “I will strive with a missionary zeal to realise this dream”, the NC candidate said.
The Provincial President said that National Conference has entered into the electoral arena with cherished mission of taking along the people from different walks of life for achieving the goal of development, progress and prosperity of the state. He said his party believes in peace and progress, which is discernible due to tireless efforts of Chief Minister Omar Abdullah.
He referred to the tourism potential of scenic Surinsar area and said this needs to be explored optimally for making Nagrota a much sought after tourist destination adjacent to the capital city. He said multi-faceted activities in the constituency will open up vistas of opportunities for the youth, the skilled and unskilled work force and different other segments of the society. He sought cooperation of all in this gigantic effort.
Addressing the gathering, Jagdish Kumar Khajuria said Nagrota could have developed on a faster pace, had it got due representation in the Legislative Assembly. He expressed disappointment with the performance of Mr Jugal Kishore Sharma as MLA, saying over a decade was wasted by not espousing the cause of Nagrota. He exuded confidence that Mr Rana will fill the vacuum by giving the area an effective representation.