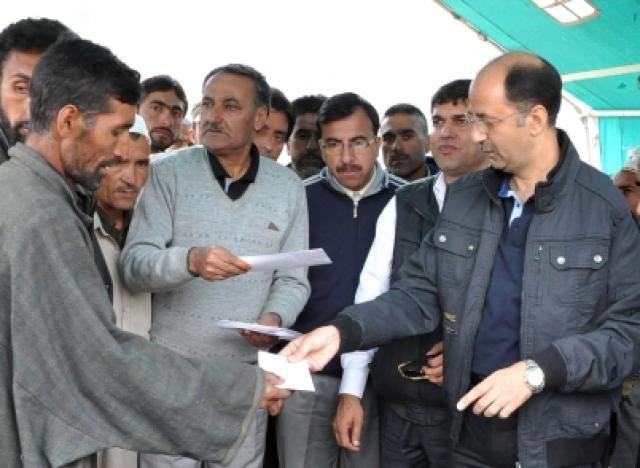 Gurez/Srinagar, October 5 (Scoop News) –   Minister of State for Home, Revenue & Relief, . Nasir Aslam Wani Wednesday visited border area of Tulail here to take stock of the damage caused due to recent fire incident in Gerry Gogy Mohalla, in Kilshay village. In all, 12 houses, 14 cowsheds and one mosque were gutted in the blaze.

. Nasir Aslam expressed grief over the widespread damage caused due to the fire and distributed cash assistance among each family out of the Chief Minister’s Relief Fund. He also distributed cheques worth Rs. 35,000 as ex gratia among each family and announced three months’free ration for the affected families.

Besides the cash relief, 63 blankets, utensils, bedding and tents were also distributed among the fire victims.

Deputy Commissioner, Bandipora, said that Rs. 10,000 each was distributed among the affected families as immediate relief on the day of incident.