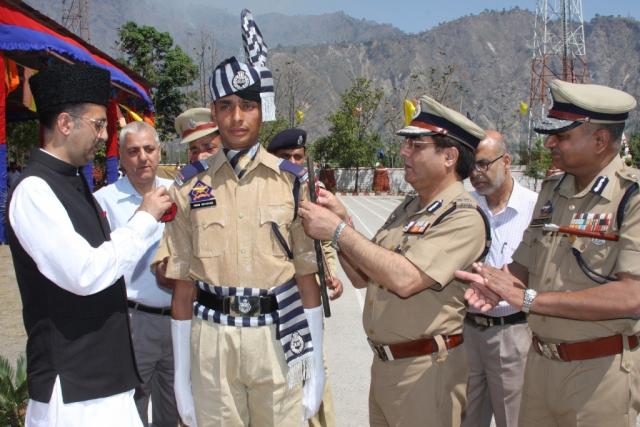 Jammu, April 06 (Scoop News) –     Lauding the role of Jammu and Kashmir Police in maintaining peace and order in the state, the Minister of State for Home,  Nasir Aslam Wani has said that the force has a vital role to play for maintaining lasting peace in the state.

Wani was addressing 1097 recruit constables at 10th Attestation-cum-passing out parade at Subsidiary Training Centre, (STC) Talwara, Reasi today. He said that Jammu and Kashmir Police, after giving supreme sacrifices of its jawans and officers has succeeded to bring peace in the state and the force will have to face more challenges to keep it maintained. To deal with these challenges the department has to increase its proficiency in the field of training and investigation, he added.

Congratulating the pass outs, the minister asked them to make public service their motive and deal with the criminals firmly. He said that the pass outs would have to safe guard the interests of the people, especially the women, children and the down trodden to get public cooperation which could yield better results. He said that Police has been in the service of the people since long and has always stood along the people to safeguard their lives and property. The pass outs would have to keep the flag of the force afloat, the image maintained which the jawans and officers of the Organization have gained with the dint of their dedication and sacrifices.

Stressing upon the officers to sharpen the training skills, the minister said that with the changing times, latest techniques of policing should be adopted to deal with the new challenges of Cyber Crime and terrorism. He said that besides its professional duties, the force has always remained on forefront in different fields and due to its efforts, developmental activities and a large flow of tourists has been witnessed in the state during the bygone year.

The Director General of Police (DGP),  Kuldeep Khoda also addressed the function. He said that Police has been focussing on sharpening the training skills to ensure security of the people of the state. Latest techniques of policing are ingrained in the trainees, making them able to face different situations. He said that modernization in respect of equipment and gadgets has been receiving high priority to sharpen the skills of policing. JKP has worked for the protection of life and property of the people and for this jawans and officers of the force have made supreme sacrifices of their lives.

Stressing upon the pass outs to make public service their motive,  Khoda said that the jawans of the force have proved themselves protectors of the public and the people also have pinned much expectations with the force. Besides safe guarding the interests of the State, the out going jawans would have to keep the pledge in letter and spirit in the field while discharging their duties at different fronts. At all occasions, both in the times of peace and unrest they have to exhibit their highest standards of discipline and professionalism, said the DGP. He stressed upon them to perform their professional duties in coordination with the people which would help them to deal with the criminals and other elements effectively, besides building the image of the Organisation.

Earlier, in his welcome address, the Additional Director General of Police,  K. Rajendra Kumar said that all police training institutions in the State have been upgraded and strenuous efforts have been made to strengthen the infrastructure and training facilities. He said that proficiency and training is being focussed on priority to make the force competent to face the latest challenges from the criminals. He said that the trainees besides undergoing basic training, have been trained in different fields of policing like commando, crowd control, disaster management, community policing, crime control, weaponry, law and order tactics, computer handling, investigation and respect towards human rights. The present batch of recruits belonging to different districts of the State, include 28 Post Graduates, 484 Graduates and 394 (10+2) Grade. During their basic training they have been exposed to various training modules targeting the professional needs of the force.

Principal STC Talwara  M. S. Panoo gave an oath to 1097 recruit constables, with a solemn pledge to serve the nation.