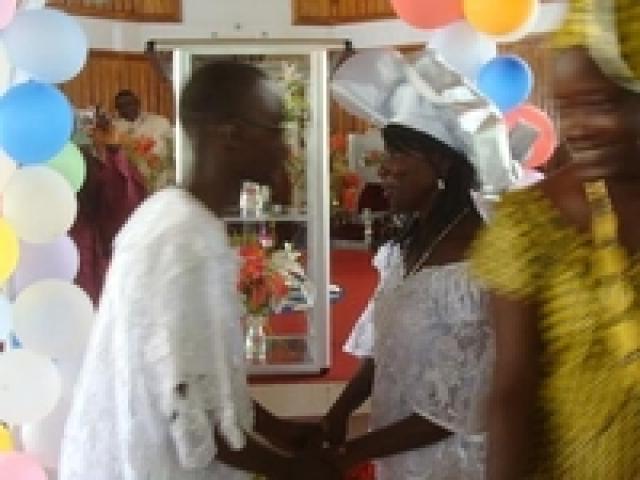 By Nat Bayjay for Ceasefire Liberia

“So, a man should leave his parents and unite with a woman and the two shall become one”.

This was exactly what Nat Bayjay, a staff reporter for FrontPageAfrica and also blog manager for Ceasefire Liberia, and Mrs. Zahn Bayjay did on Sunday, December 27, 2009 when they got married. The ceremony was held at the Dominion Christian Fellowship Center in Clara Town, Bushrod Island in Monrovia.

Taking the bold step is not an easy thing to do, especially for a young person of our contemporary world. However, Bayjay said his decision to take a wife at this time was not in haste; neither was it due to any pressure. No, this is not about being under any pressure to do so. Mind you, this is a life time decision that one has to make in his or her life. So, it takes planning and most important of all, a determined mind to do this.

There are always two things that come to one’s mind whenever the word ‘wedding’ is mentioned, especially so in Liberia. One issue is that marriage is a very costly thing. Another perception in Liberia among most young Liberians is that getting wedded means ‘tying yourself down’. It is usually perceived that marriage is not meant for the young as he or she has not enjoyed life yet.

But Bayjay sees another side to these two perceptions.

First and foremost, one doesn’t necessarily have to break the bank by getting married. One is not bound to have a fat bank account before making things right with God.

On the issue of exploring life and ‘enjoying yourself’ before marriage: That is one thing that is spoiling most of us young Liberians. Whoever told you that you don’t enjoy life when you get married at a young age? The sense of responsibility that goes along with marriage makes you more careful for the rest of your life.

The Senior Pastor of the Clara Town Dominion Christian Center, Reverend Clarence Paye, while officiating the ceremony between the two young people, reminded the entire congregation and other well-wishers who had gone to witness the event to follow the example of the couple.

Reverend Paye said, “What these two people are doing here today in the presence of God should serve as an example that you don’t necessarily need to have all of the long convoy of cars and other flashy things to make things right with God. It means that you don’t have to be old either before getting married."

Gracing the occasion over the weekend were dozens of well-wishers, family members as well as friends. Notably among them were Kanvee Gains-Adams, Liberia’s Gospel icon and her husband Emmanuel Adams; Choko Wlehyou-Barchue, who is affectionately called The Queen of Liberian Gospel Bassa Music; S-Square, the newest sensational Gospel duo popularly known as ‘The Na You Boys’; and Hon. Alomiza Ennos, Montserrado County Representative (Congress for Democratic Change, CDC) of Electoral District Number One.

Gospel artist Kanvee, before singing the ever-popular “Finally” and “Carry My Load” songs, added, “What I admire about this wedding is the simplicity of it. I wish I had the chance to do mine over and keep it simple just as Nat is doing."

Filed under: Lifestyle, World
Share Tweet Pin G Plus Email
previous article: Planning For A Simple Wedding In Liberia
next article: My Journey to Freetown