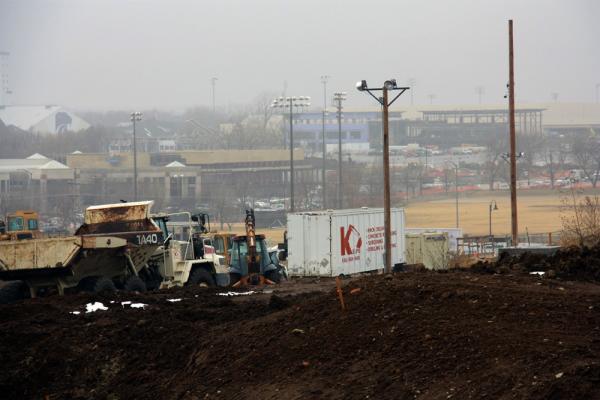 Photo shows lax security around NBAF construction site in Manhattan. A person can easily slip in at night, after dark and take photos and measurements. I have inspected the perimeter myself on numerous occasions and was able to walk around the entire perimeter unchallenged. Security here is somewhat of a joke. They do have some surveillance videos, which can easily be defeated with laser pointers which can disable the light sensitive diode. Response and patrol times are also lacking around this site, with guards observed playing on their cellphones and texting their friends. You also have KSU students constantly walking around, jogging etc. Which makes it extremely difficult to know who is conducting surveillance of this area and who is not. In addition KSU security seems oblivious to concerns in this area.

During the construction phase of the National Bio and Agro Defense Facility (NBAF) in Manhattan, Kansas certain vulnerabilities were noted that officials within the Department of Homeland Security have ignored and remain completely unaware of  apparently.

These include lax perimeter security and mobile security patrols.

“During the design and construction phase of this project, you can expect that spies and operatives have already infiltrated the ranks of the companies receiving construction contracts to work on this project”, said one source in Manhattan who is monitoring this situation closely. “This is a given”, he said. I should add that this individual would not discuss specifics for obvious reasons.

Manhattan, Kansas was selected as the NBAF location after an extensive three-year site selection process that included a thorough risk assessment, environmental impact assessment, and security assessment. The Manhattan location puts the NBAF in proximity to research of NBAF-related missions in veterinary, agriculture, and bio-security research expertise, and resources. This location also puts NBAF in proximity to a major hub of the veterinary pharmaceutical industry. The NBAF will be built on a site on Kansas State University adjacent to the existing Biosecurity Research Institute.

The NBAF will be a state of the art laboratory with critical research adjacencies for DHS and USDA to carry out their unique and congruent missions. NBAF will contain 574,000 gross square feet of facility space which includes BSL-2, 3, and 4 shared research space for the development of vaccines and other countermeasures. Approximately 10% of the space will be for BSL-4 research.

Read more about the laboratory biosafety levels and definition of terms used in the NBAF discussion.

The selection of Manhattan for the NBAF was based also on “collaboration and the proximity to KSU” without much attention to the security risks and challenges this poses.

I remember a few years ago talking with an FBI agent who was coaching me on how to spots spies once said:

“One of the best ways to caught spies is to know their targets.” Perhaps the best advice I was ever given!

Among the probable targets in Kansas include Kansas State University, the home of the National Bio and Agro-Defense Facility (NBADF) at Manhattan, Kansas.

The NBADF a state-of-the-art BSL-3 and BSL-4 laboratory bio-containment facility for the study, storage of some of the world’s most deadly foreign animal, emerging and zoonotic (transmitted from animals to humans) diseases that threaten the U.S. animal agriculture and public health.

The selection of Manhattan, Kansas as the NBAF site was made by a panel of federal employee experts – career civil servants – from the departments of Agriculture and Homeland Security in 2008. The decision was based on stated evaluation criteria, environmental impacts, and the threats and risks of operating the NBAF. 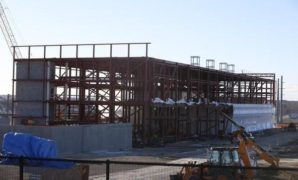 Photo of ongoing construction of NBAF facility in Manhattan.

In Kansas, the NBAF will be at the center of a “strong partnership” between USDA, DHS, academia, and industry working to protect our Nation from a catastrophe.

The site location near Kansas State University provides proximity to what they call “a critical mass of existing research capabilities and the leading scientific expertise in the Animal Health Corridor.”

The problem with that is a university campus itself is open to all sorts of people, including foreign nationals and students from over a dozen different nations. Many of whom have never been scrutinized in terms of their backgrounds.

“That creates a security nightmare for officials trying to prevent or counter espionage”, said one intelligence official I spoke to who asked that we not use his name in this report for fear of losing his job.

“As it sits now KSU is crawling with foreign exchange students, a percentage of them are probably foreign intelligence agents”, says one anonymous source in Manhattan, Kansas. “It is a sure bet they are active in gaining intelligence on the activities of the NBAF as we speak.” 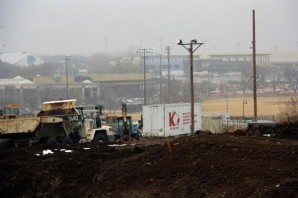 Ongoing construction at NBAF site, note name of construction contractor in this case. Other contractors involved in this project suspected of subcontracting with companies who employ illegal aliens.

Of particular concern is the fact that NBAF security is being outsourced to private companies rather than government agenices. A matter I have argued is not the most ideal situation for the facility and bio lab moving forward. Especially where it concerns security!

Curtis Whitten’s Wichita-based firm VendTech Enterprise also has a contract at McConnell. He provides equipment and services such as surveillance cameras. But that’s just a slice of his company’s work, which extends to other military bases and federal facilities outside Kansas. VendTech’s newest contracts is to provide guards for the National Bio and Agro-Defense Facility in Manhattan.

VendTech has its problems – see article:

The individual doing much of the hiring for this project is Deon Whitten http://www.linkedin.com/pub/deon-whitten/35/353/79b

Deon Whitten is admittedly no security expert, or been trained in counter espionage – and only has a background in human resources.

This poses some additional concerns as well, that I can’t get into right now.

Whitten currently has 72 LinkedIn connections which have all been extensively mapped out  in terms of his “social connections”, some of these 2nd and 3rd tier connections have security related issues and problems (DUI, criminal history, financial problems) which could reflect back on Whitten.

Without getting into too much detail on this – Social network mapping starts with the larger concept of social network theory. Under this theory, you map social networks through the use of nodes and ties. A node is a single point on the network, either an individual or a group, such as a business. The ties are the connections between the nodes. Visually, a map will usually take the form of a number of circles connected by lines. Lines may vary in length and thickness to represent the various connection types between the members of the network.

Needless to say social network mapping can give you a lot of information.

As more and more people connect via the web, social network analysis software has become instrumental to understanding complex relationships and changing demographics. At their simplest level, these tools can reveal the elements of a network and the many connections. However, there are far deeper complexities within social networking, including factors such as influence, cross-network links, and concepts like “betweeness” that this software can also analyzed and display.

That can give you a plethora  of information on companies, business and the individuals involved in special projects such as the NBAF. 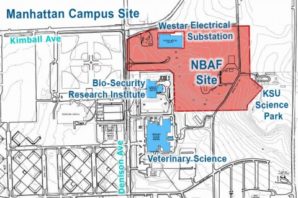 Detailed NBAF site showing site in relation to water electrical substation and other possible targets in the event of a terrorist attack at this facility. Source: Open source document.

Site for the proposed federal National Bio and Agro-Defense Facility. Photo taken of site just after announcement of location by DHS. After the announcement numerous people came to inspect this area, some were even observed taking soil samples.