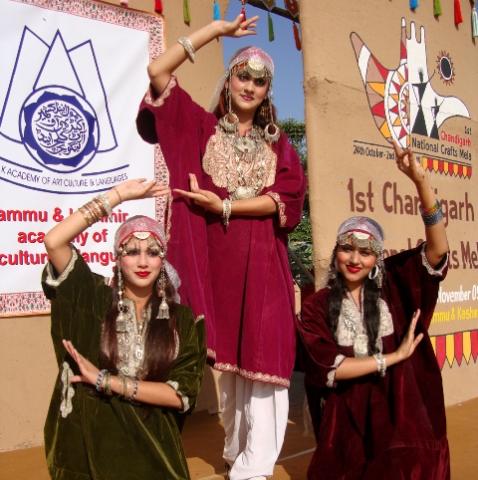 Chandighar (Punjab), October 23 (Vijay Kumar)-   General Dr. S.F. Rodrigues, PVSM VSM (Retd.),  Governor  of Punjab and Administrator, Union Territory on Saturday  said the main objective of organizing the National Festival is to built understanding between various Cultural groups of  India. He said he had served in for several year. He congratulated the J&K artist, , NZCC for holding of extraordinary programme.

The Jammu and Kashmir is the theme State in this  first ever National event designed on patron of world famous Surajkund Mela, was  inaugurated by  General Dr. S.F. Rodrigues, PVSM VSM (Retd.),  Governor  of Punjab and Administrator, Union Territory, Chandigarh here this morning. The magic of Cultural diversity of Jammu and Kashmir today fascinated  thousands of spectators assembled at Kalagram here on the inaugural  ceremony of 10 day long National Crafts Festival.The event  has been jointly organized by   Jammu and Kashmir  Academy of Art, Culture and Languages , North Zone Cultural Centre and Chandighar Administration.

Speking about the heritage, Dr. S.F. Rodrigues said , it is, therefore, imperative to create a responsive mechanism for generating awareness among our people to respect our traditions & the customs of different regions. He directed the NZCC to preserve the dying arts for researchers and all generations to come.

Strongly advocating the need for a well structured coordinated plan for strengthening linkages of composite Indian culture, the Dr. S.F. Rodrigues, called for adopting a holistic approach for the preservation and promotion of our inherited values.

Earlier the Governor called the J&K group incharge and ,Dr. Javaid Rahi and directed him continued here to be an active partner of this festival and resolve all the issue with NZCC and Chandighar Administration.

Earlier a day before its start, the national crafts mela  courted controversy as had threatened to pull out of it on variouse issues.

The mela is expected to give a boost to the Arts and crafts  of J&K and other States of India as well and will boost business and inflow of tourists from both within and outside the country. Around 100 artists from Jammu Kashmir and Ladakh performed at the inaugural ceremony and around 150 artists would perform at the main venue from 6 to 11 pm this evening.

Around 3 lakh visitors are expected to come to this National Festival during these 10 days from the neighbouring states and also from abroad. The closing ceremony will take place on Nov 2 and Kumari Selja will be the chief guest. She will also give away 3 prizes each in the category of crafts and handlooms titled as Kala Mani, Kala Nidhi and Kala Giri. A prize will also be given to the best crafts man. The closing ceremony will also have a medley of folk dances by NZCC artists.