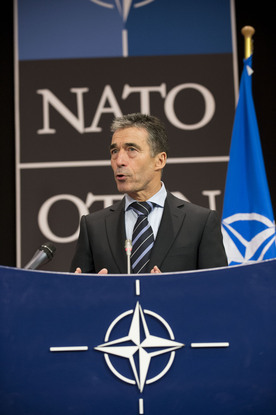 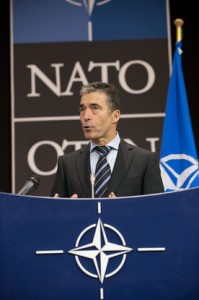 “We have just had a good discussion on Afghanistan with Defense Minister Mohammadi and our ISAF partners on the growing capability of the Afghan Security Forces. And we agreed further elements in our plans for a mission to train, advise and assist them after 2014”, said NATO Secretary General Rasmussen.

During a scheduled press conference today by NATO Secretary General Anders Fogh Rasmussen on the situation in Afghanistan, the Secretary affirmed an agreement to “train, advise and assist the Afghan military” beyond the 2014 date of scheduled withdrawal of forces.

We have just had a good discussion on Afghanistan with Defense Minister Mohammadi and our ISAF partners on the growing capability of the Afghan Security Forces. And we agreed further elements in our plans for a mission to train, advise and assist them after 2014.

Afghan forces took the lead for providing security nation-wide in June. And they have shown they are up to the job. They have mounted operations across the country with minimal or no ISAF support.

Currently, they are leading more than 1,000 patrols a day. They are planning and conducting complex operations in all parts of the country. And they are developing their skills in areas such as helicopter air support.

All this will put them in a strong position as they prepare to assume full responsibility for security at the end of 2014.

This transition will mark the end of our combat mission, but we will continue to stand by Afghanistan. Today, Allies and partners reconfirmed our support for the Afghan security forces. And we are moving ahead in our planning for Resolute Support: our mission to train, advise and assist the Afghan forces after 2014.

We have moved closer to putting that mission in place. Our military commanders have reviewed planning and identified in broad terms the key elements we require to set up the mission.

We still have work to do. This includes agreeing a legal framework with the Afghan government on the status of our forces. This is the sort of framework we need whenever and wherever we deploy forces. We remain committed to working with our Afghan partners on establishing the new mission. And our plans will be further developed and closely coordinated with the Afghan government.

We also discussed next year’s elections. Elections which will be fully led and managed by Afghans. We expect those elections to be held on time, and to be transparent, inclusive, and credible.

Finally, we reviewed the implementation of the United Nations Security Council Resolution 1325 on women, peace and security, and its related resolutions. This is important to us all, as we made clear at the Chicago Summit last year.

Meanwhile NATO troops in Afghanistan are bracing for “a bloody winter ahead of the country’s presidential election”, a senior U.S. military official said Tuesday, warning of an anticipated “spike in high-profile attacks and political assassinations during a season that typically brings a lull in fighting” (source: Washington Post “NATO optimistic about U.S. security agreement with Afghanistan http://www.washingtonpost.com/world/nato-optimistic-about-us-security-agreement-with-afghanistan/2013/10/22/7094f452-3b3e-11e3-a94f-b58017bfee6c_story.html).

This basically set the stage for roughly 9,000 U.S combat troops to remain in Afghanistan well past the 2014 withdrawal date.

Filed under: Military, News
Share Tweet Pin G Plus Email
previous article: MolMed expands in the United States the Phase III trial of TK for the treatment of high-risk leukaemia
next article: Russia and NATO pledge to cooperate in fight against terrorism around the world!