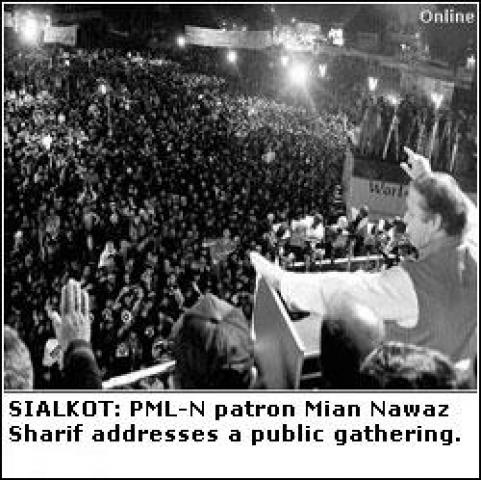 SIALKOT:Taking the PML-Q leadership head on, former prime minister Nawaz Sharif said on Wednesday it was time to hold it accountable for spending public money on `self-eulogising’ publicity campaigns.

Addressing a big public meeting here at Government Murray College ground and during his speeches at Kamoki, Othiyan, Daska and Pasrur he ruled out the possibility of any political deal with the dictators and urged the people to support his party to save the country from the crisis caused by the last military ruler.

He strongly condemned the issuance of notices to the deposed judges for their eviction from their official residences.

Mr Sharif said the general election would be a referendum against the dictators.

The former prime minister said that upcoming elections would be meaningless if the judiciary was not restored. Nawaz said he had tried his best to convince PPP Chairperson Benazir Bhutto to support the demand for the restoration of pre-emergency judiciary but she kept on insisting on `the freedom of judiciary’.

He said PML-Q was responsible for the destruction of judiciary and killing of innocent people, including children and women, in the name of war on terror.

He said it was quite clear that elections would be rigged.

He urged the police and administration not to obey the `illegal’ orders of the government and asked people to be ready to launch a protest movement for the restoration of the judiciary and Constitution.

Filed under: Politics, World
Share Tweet Pin G Plus Email
previous article: Tigers leave for New Zealand
next article: Are You Facing Autoamatic Draft Problem? Here is the Remedy for the Issue