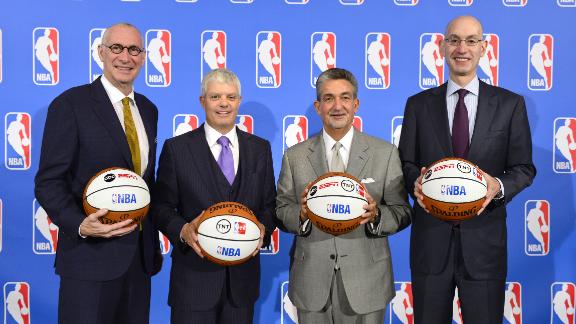 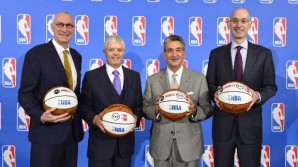 The National Basketball Association announced one of the most lucrative deals between a sports organization and a television network in history. The deal is worth $24 billion over 9 years beginning before the 2016-2017 season.

The current contract that the NBA is signed to since 2007 is with ESPN and Turner Sports. Under this contract, ESPN and Turner pay the NBA a combined $930 million annually for media-rights; the rights to broadcast all NBA games on only their respective networks. The NBA is aired exclusively on the networks ESPN, TNT, and ABC.

The new 9yr/$24 million deal guarantees the NBA upwards of $2.6 billion annually from ESPN and Turner, an astonishing 180% increase from the old deal. But why the dramatic increase you might ask. With the launch of other television networks such as Fox Sports 1, ESPN and Turner feared that they would lose some of their televised games and this in turn put a lot of pressure on these two networks to quickly structure a new deal. Now the ball was metaphorically in the NBA’s court. They had the leverage they needed to structure a deal under their terms and force ESPN and Turner to pay a premium to prevent the Association from taking their business elsewhere or from another network stealing their broadcasts.

What this means for the players

NBA contracts are already astronomical. This is because that half of all of the NBA’s basketball related income goes towards to the players’ salaries. The increase from $930 million to $2.6 billion leaves a difference of $1.7 billion; now half of that would be around $850 million. This season alone, all of the players combined salary totaled to $2.33 billion. Add another $850 million to that and that’s the number you can expect to see for combined salaries during the 2016-2017 season.

Each team has a salary cap; the combined revenue of the NBA divided by all 30 teams and that number is how much they can spend on players and their contracts. During this season, the cap was set at $63 million per team but with the terms of the new deal and the dramatically increased revenue to the NBA you can expect to see the cap per team be raised to around $90 million in 2016.

For each individual player, if they are performing at an outstanding level and they are a great fit for their team, the team and its owner has the option of giving them a max contract. These contracts are constructed off of the salary cap. The contract outlines depend on how many years that you have been playing in the league. A player coming off of their set 2 year rookie contract is eligible for 25% of the cap, players who’ve been in the league 7-9 years are eligible for 30% of the cap, and players with 10 years or more in the league are eligible for 35% of the salary cap. Again with the increased revenue from the deal, you can expect all-star players like LeBron James (who’s been in the league for 10 years) or Kevin Durant to potentially sign a contract that can near $150-$200 million.

A prime example would be the best player in the league, LeBron James. Before his return to Cleveland, he made it known that he was only signing until the end of the 2015-2016 season and then entering free agency. This was specifically done so that James could cash in on potentially the largest NBA contract ever structured. This is all due to that new money from ESPN and Turner Sports.

What the contract does for you and me

Under this new deal the general public is going to have more options on which games to watch. Many people are going to enjoy this feature because more often than not, there are games on that either people do not care about or it is the only one that is televised so they have to watch it. The new contract is allowing ESPN/ABC and TNT an additional 22 games to be aired but the national television scheduling process needs to be adjusted so these games can be aired at a decent time.

This also gives the option of teams that do not have big name players, but are still good basketball teams, to gain some exposure and demonstrate their skills on a national level.

If you’re like me and weren’t born with the athletic ability to play in the NBA, this new contract is going to have a slight negative affect on us. In order to watch these televised basketball games on ESPN, ABC, or TNT, you must pay for a cable service that provides these networks. Sports networks make up a large sum of your existing cable fee and unfortunately, your cable bill will increase due to this deal. ESPN and Turner Sports are dishing out a large amount of money to pay the NBA and you can almost be certain that they will look to the general viewers to help with the payments. Your cable bill could potentially rise a couple of dollars per month just because of the NBA; even if you do not like or watch basketball.

The Collective Bargaining Agreement expires in 2021 but the players have the option to opt out of it in 2017. This will come at the end of the first year after the new TV contract is in effect. The players might take it upon themselves and fight back against the NBA and its owners to gain what they lost in 2011, just this time around it might be much more that they seek.

Filed under: Basketball, Sports
Share Tweet Pin G Plus Email
previous article: Small merchants can now benefit from the same POS software tools as the larger players
next article: What a Saying on the Venice Boardwalk Has to do with You