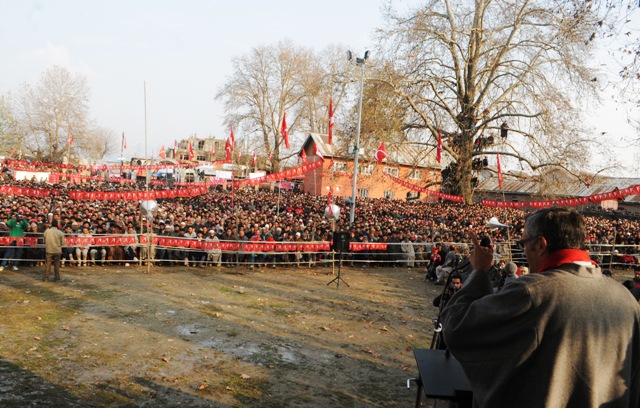 Lolab/Handwara, November 29, (Scoop News)-Chief Minister and National Conference Working President Omar Abdullah addressed elections rallies in Lolab and Hanwara in North Kashmir on Saturday and said that it was only National Conference that could fight to safeguard the political interests and sentiments of Jammu and Kashmir at a juncture where brazen calls were being made to abrogate Article 370 and make amendments in the State Subject Law that protects J&K’s demographic character.

“It was National Conference that waged a selfless war against tyranny and oppression and rid this State of the humiliation of monarchy and feudalism. We started our struggle against the indignity of autocracy and we went on to ensure that our peasants are freed from the clutches of feudal slavery and it was Sher-e-Kashmir Sheikh Mohammad Abdullah who sacrificed his entire life for the honor of our people. Today, we stand at another threshold of a litmus test where everything we have stood for and rendered sacrifices for is being threatened not only by BJP but also its local stooges who have abandoned the slogan of Azadi only to support BJP’s aims to do away with the Muslim Personal Law, to abrogate Article 370 and to inflict irreparable damage on our State Subject Law which protects our State’s demographic and cultural character” Omar Abdullah said while asking the people to give a verdict for their honor by voting for National Conference and voting against those who used the separatist platform and exploited thousands of young boys right to their youthful graves to reach a stage where they could impetuously jump in to the lap of RSS.

Omar Abdullah said that National Conference has a holistic vision for the State’s political, economic and cultural development that is based on the bedrock of our political individuality. The NC Working President said that the last six years of the NC-led Government’s tenure is an era of great systemic reforms in the fields of power generation, healthcare, education and transparency. “We will never be satisfied in our efforts till J&K becomes the richest State in the country and we become completely self-reliant. We started power-projects with a combined capacity of 1,400 Megawatts during the last six years and laid the edifice for the creation of another 9,000 Megawatts that will be functional in the coming five to seven years. This will be the first major step in J&K’s journey towards economic self-reliance. We have made it possible to conquer the circumstances of despair and hopelessness and to start a journey that will reclaim our honor and dignity. When our opponents and detractors were busy gathering rice-thieves, land-grabbers and SOG specialists in their party, National Conference delivered on its promises of bringing transparency, accountability and empowerment in the system. The Public Services Guarantee Act (PSGA) and the Right to Information (RTI) Act are two laws that we enacted to empower the common man in our State and to restore his honor and dignity as the most important part of our political system”, Omar Abdullah said.

While addressing three back-to-back massive election rallies in Kupwara District of North Kashmir on Saturday, Omar Abdullah said that National Conference would not allow anyone political force on the face of this earth to toy around with the political sentiments, aspirations and rights of the people of Jammu and Kashmir. “While both BJP and PDP might throw around money to buy people, the time-tested moral of politics is that sacrifices and honor always outweighs money and manipulation. My party doesn’t have thieves, convicts and retired corrupt bureaucrats and will never foist people of such background on the people of this State. We have always been a party that has found its strength from the indomitable and honorable struggle of the common-man against all adversities and we will continue to live and die by the aspirations of our people”, the NC Working President said while addressing election rallies in Lolab and Handwara in North Kashmir.

Filed under: News, Politics
Share Tweet Pin G Plus Email
previous article: Iranian general call on all Basiji forces across the Muslim world to stand against ISIL and other Takfiri terrorists
next article: CEO reviews pre-poll arrangements for second phase