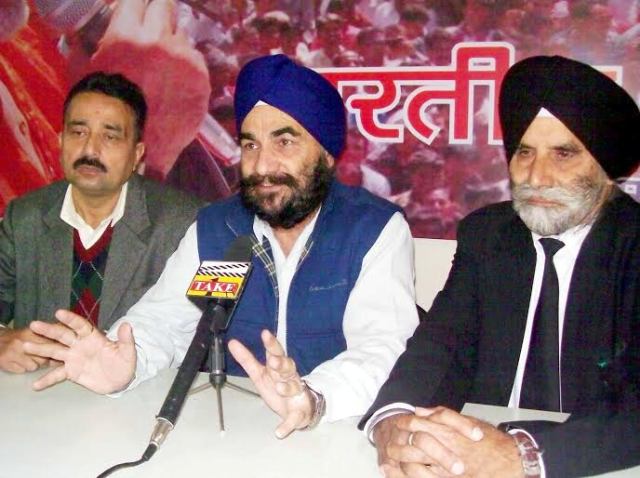 Jammu, December 07, (Scoop News)- The growing popularity of BJP’s Prime Ministerial candidate Narendra Modi is making the National Conference and Congress uncomfortable as these parties are finding their political future uncertain and in dark. These parties are using their supporters to create confusions in the minds of different communities, including Sikhs. This was alleged by BJP Senior leader S. Varinderjeet Singh, while addressing a press conference alongwith other Senior leaders Mohan Singh Chauhan and S. Amreek Singh (Adv.).

S. Varinderjeet Singh, while reacting on the recent statements of some individuals and supporter organizations of NC and Congress, that Sikhs in Gujarat are not safe and have been tortured and forced to leave Gujarat, said that it is white lie and the fact is that the Sikhs in Gujarat are as safe as other communities living there. They are even more secure than in Delhi, where they were butchered in thousands in just few hours in 1984 during the Congress rule. They are also more safe in Gujarat than in J&K, where they were killed in 1989 riots in Jammu during the National Conference rule.

Varinderjeet Singh said that a misinformation campaign has been launched by these parties, as they are feeling insecure due to the growing graph of Narendra Modi. He said that allegations like -Modi is victimizing Sikhs- are based on ignorance and selective interpretation of the facts.

Singh said that whatever is being said about Sikhs in Gujarat is a totally distorted picture to present the facts in other way regarding 454 Sikh families who were settled by Lal Bahadur Shastri in 1965 in Kutchch district of Gujrat. He said that each one of these families is safe and their number have gone now to 5474. Many of them are reputed business, elected representatives and social activists.

As far 784 families whose agriculture land allotment have been cancelled is the result of the inquiry conducted under an Ordinance brought by the than Congress Chief Minister Ghansham Bhai Ojha on April 14, 1973, which said that their allotment stands cancel as they had produced fake documents to get the allotment of land. Taking any benefit on fake documents cannot be justified by any means and it should not be linked to a particular community or caste. He further said that out of these 784 families, 108 families are from Gujarat, while 512 are from other states. The most interesting thing is that only less than 5 dozen families are of Sikhs and maximum of them are non-Sikhs. Hence, it is a totally false propaganda and the Sikhs should not fall in this trap and should themselves go through the figures. He further said that even 20 families from Gujarat have openly came to public through media at Chandigarh claiming that they are most secure, most respectable citizens and most peaceful citizens of Gujrat, which is again a slap on NC and Congress leaders who are using their touts to make baseless statements through media.
S. Amreek Singh said that with each passing day the political stature of Narendra Modi is going up and it cannot be tolerated by NC and Congress. Narendra Modi has always appreciated the valour of Sikhs and their contribution towards nation. Modi has even described Sikhs as backbone of the country, which is indeed a great honour to us, he added.

The BJP leaders, while demanding speedy disposal of all the pending cases of the victims of 1984 Delhi riots, appealed the Sikhs to not get misled by the propaganda against Narendra Modi and strengthen BJP.