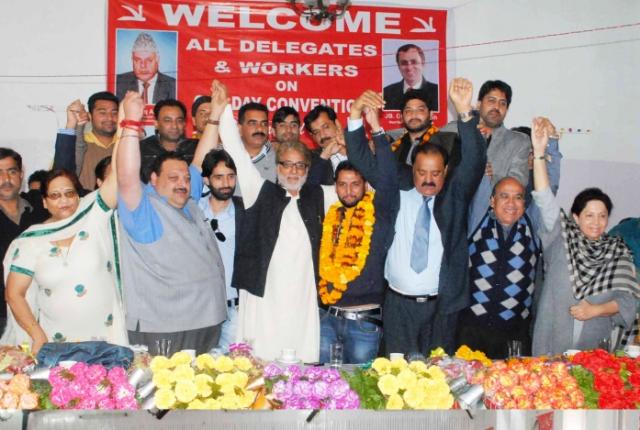 They asked the workers of National Conference to play their role in this direction at all levels and ensure working of the two political parties in a unified manner to address the public grievances.

Slathia presented resume of the new initiatives taken by the coalition government led by Omar Abdullah during last about three years and said that the commitments made by the government to the people would be fulfilled during its tenure.

“Various measures have been taken to improve and upgrade the basic amenities of the people and many more are in pipeline”, he said and referred to the initiatives taken for the betterment, growth and development of industrial sector in the State. He said special focus is on the development of MSME sector to provide opportunities to the budding entrepreneurs to venture in new trades and earn their livelihood substantially.

In his speech, Devender Singh Rana asked the National Conference workers to act as a bridge between the people and the government and disseminate the public-friendly initiatives taken by the Omar-led Government during last three years in the State. He told them to make people aware of the major historic decisions of Omar Abdullah Government aimed at empowering people at grass roots.

Rana asked the workers to play their role in getting pubic grievances redressed at the political and administrative levels and ensuring the benefits of new initiatives taken by the government reach to the people in every area.

“You represent aspiration of the people and your support is overwhelming in all the three regions of the State”, he told them asking for strengthening coalition ties with Congress to make development programmes and policies of the coalition a success.

Rana referred to the establishment of Panchayat Raj and transfer of powers to these democratic institutions and termed it historic decision of Omar-led Government. He said sarpanches and panches would play their vital role in translating the policy of equitable development of present government into reality.

Devender Singh Rana also talked about the enactment of Public Service Guarantee Act (PSGA) and said that this innovative decision of coalition government would not only empower general public to seek public service in a time bound manner but reduce of chances of corruption at lower levels to a greater extent.