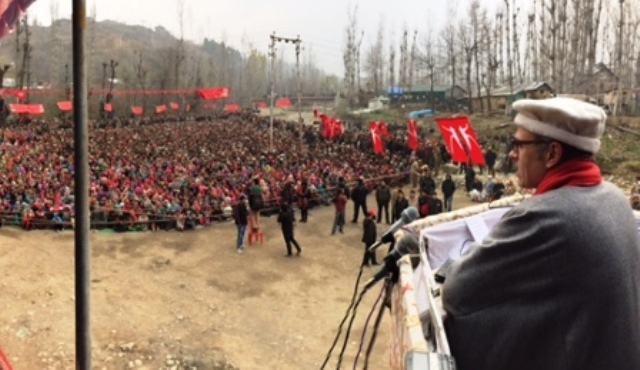 Beerwah,November 28, (Scoop News)-NC Working President Omar Abdullah Friday said that the fight of National Conference to uphold the promises made to the people of J&K was not an electoral fight but an inexorable ideological battle for J&K’s political dignity. While addressing youth in Beerwah Assembly Segment on Friday, Omar Abdullah said NC’s demand of reversing erosions in Article 370 and for the restoration of Internal Autonomy in J&K was not an electoral plank but formed the basis of a struggle that Sher-e-Kashmir Sheikh Mohammad Abdullah spent 23 years in jail for.

Omar Abdullah said that National Conference believed in serving the developmental and governance related day-to-day needs of the people with utmost sincerity and dedication.

“We have rendered a historic tenure of systemic reforms in the fields of power generation, roads and bridges, tourism generation, irrigation, horticulture, education and healthcare and we will continue to perform with honesty in the context of governance. We will continue to empower the common man with rights to ask questions of his Ministers, MLAs and Chief Minister. We will continue to devolve and decentralize power to the grassroots level and our efforts at liberalization of power through Panchayati Raj System and creation of New Administrative Units is noteworthy”, Omar Abdullah further added.

“However, development is not a substitute for the political resolution of the Kashmir Issue. Our proposed resolution is the reversal in the erosions made to Article 370 and the complete restoration of Internal Autonomy. We will continue to stand by these perennial demands with renewed vigor and strength. Nobody should be mistaken into thinking that the narrative of development can occlude the need for a political resolution. Our political honor is not second to our developmental needs – both aspects of our identity and collective being need to be addressed simultaneously and this is something the BJP needs to acknowledge and accept”, Omar Abdullah said while asking the people to vote in high numbers in the remaining phases of the Assembly Elections and play a part in further empowering the State with a voice that cannot be manipulated or by-passed.

Filed under: News, Politics
Share Tweet Pin G Plus Email
previous article: The Islamic state creating elaborate web of specially designed “curved tunnels” to avoid US airstrikes an lessen the chance of injury
next article: People should unite and support NC at this juncture:Dr. Farooq