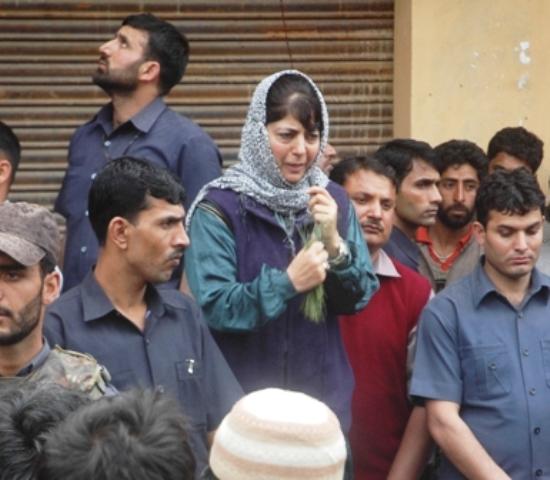 Srinagar/Pulwama, May 8 (Scoop News) – Peoples Democratic Party (PDP) Mehbooba Mufti today said. “except promises nothing concerted has been done by National Confrence government during the last 15 months.”This regime appear only on papers because the ruling elites were more particular about issuing press statements and conducting photo sessions to befool the people rather than taking effective steps on grounds said Mehbooba.

Mehbooba was addressing one day convention of the party card holders at Pulwama on Saturday afternoon.Terming National Conference (NC) led coalition regime as total failure she said that the state has once again plunged into unprecedented crises due to the mis-governance of the present dispensation headed by Omar Abdullah.

She warned that mis-governance of NC led regime would further fuel alienation among the people because common masses, braving all odds, had expressed faith in the democratic process with a hope that the democratic elected government would solve their day today problems. “It is unfortunate for the State that this regime has failed to the come up to the expectations of the people”, she regretted and added  “neither this government can carry forward the reconciliatory process nor the developmental activities initiated by the previous PDP-Congress coalition”. “Inability of the NC government to respond to the peoples’ problems could have a negative fall out on the situation in the sensitive state”, she observed and pointed out that growing alienation of the people of State especially of was result of government’s wrong policies.

She cautioned that the situation has been sliding back to pre-2002 situation due to wrong policies of this dispensation. “ In its tenure of 15 months this regime has exposed because it has reneged on all promises made with the people during the last assembly elections”, she said and pointed out that the much publicized employment policy of this regime was ultimately turned out to be cruel joke with the educated unemployed youth of the State.

Expressing her grave concern over mounting problems of the common people due to indifferent attitude of the present dispensation, she observed that instead of concentrating on ground situation the National Conference led coalition has looking for one after another excuse to shift blames of its failures on the others.

“Instead of fulfilling the promises which the ruling party had made with the people during the assembly elections, this government has been looking for excuses to hide its failures”, she said.

Calling upon the gathering to educate the masses about achievement of the previous PDP-Congress regime, said that PDP led regime had maintained a balance between development and political process. “Not only the development activities were accelerated during PDP regime but the peace and reconciliatory process was also initiated for restoring lasting peace in this region”, she said.

PDP has set new and progressive standards of governance in the state during its brief rule, she said and added people had started comparing the performance of the present government with the PDP administration.

Speaking on the occasion former Finance Minister Tariq Hamid Karra regretted that the present State Government has not only failed on all fronts, but this regime through its misdeeds and mis-adventurism was also ruining the positive atmosphere created by the previous regime headed by Mufti Mohammad Sayeed”. “Not only this regime lacks vision and commitment to address of the common masses, the National Conference has also failed to honour mandate of the people” he observed.

Filed under: Politics, World
Share Tweet Pin G Plus Email
previous article: The strike comes to an end in Nepal with Maoist bowing down to people’s will
next article: Security Forces busted a hideout,war-like stores recovered in J&K