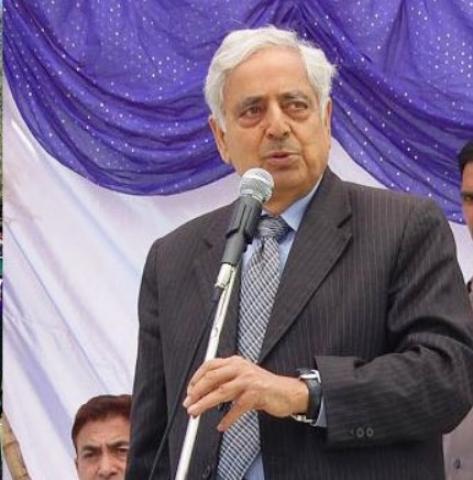 Srinagar, June 3 (Scoop News) –Peoples Democratic Party (PDP) patron Mufti Mohammad Sayeed said that the noises made by NC on AFSPA are patently phoney and meaningless in view of the repression let loose by it on the people of the state. Addressing a large gathering here today he said the gulf between the perception and pratice of the NC has been a historical fact but it has comeout most pronouncedly during the last five years during the last fice years. the function was organized to receive noted trade union leader Mohammad Khurshid Alam into the party fold along with thousands of his supporters.

Apart from Mufti Mohammad Sayeed the top leaders of the party including Molvi Iftikhar Hussain Ansari, Mohammad Dilawar Mir General Secretary, Senior leaders Tariq Hameed Karra, Qazi Mohammad Afzal, Mohammad Sartaj Madni, Ab Haq Khan, Peerzada Mansoor Hussain, Mohd Altaf Bukhari, Naeem Akhtar, Ms Asiea Naqash were present to welcome Khurshid Alam and his supporters.  Welcoming Khurshid into the party fold Mufti and other speakers said it was an indicator of the growing popularity of the party. They expressed the hope that it would strengthen the party at the gross root level and be in a better position to deliver the change that people are expecting to come in the next elections. Mufti said the party’s doors are open to all right thinking people who have the good of the state at heart and who want to contribute positively to its growth and political resolution.

Mufti said the NC government has reduced the demand for revocation of AFSPA to a mere slogan by its conduct on the ground. He said the people of Kashmir have witnessed worst atrocities and repression from the present government which is comparable only with the record of its own previous governments. he said thousands of boys have been framed in fake cases jeuparadising  their future where as hundreds have been injured and rendereddisabled by the use of most atrocious crowed control methods like pellet guns and chilly bombs which is used only in Kashmir.

Mufti said the PDP believes that free expression and decent constitute the soul of democracy that is why it opened the doors of all jails and dismantled repression in 2002 and allowed uninhibited space to all stake holders. He said ideas have to be fought with ideas and use of force or imprisonment is no solution. He said it is the right of the people who call for boycott to do so. What is required is to engage them in decent political debate and serious dialogue and leave the outcome to the judgment of people. He said it was unfortunate that the civil liberties that had been restored by the previous government  have again been curtailed which doesnot help the process of resolution and reconciliation.

Reiterating that the peaceful resolution of Jammu & Kashmir problem is inevitable for the growth and development of the subcontinent Mufti said people of the state have to play an important role in this effort. He said it is now obivious that the resolution process can be carried forward only through a democratic process which is the lone acceptable option in present day world. “We have to think wisely and strategically and use our vote effectively to be able to reclaim our rights which have been seriously compromised over the past”, said Mufti.

The former Chief Minister said he had urged the Prime Minister during his recent meeting with Dr Manmohan Singh that the positive change brought about through a genuine  electoral process in Pakistan should be seized upon to engage that country in serious dialogue in all issues including Kashmir. He said it was encouraging that Pakistan had overcome its internal contradictions through democratic process and expressed hope that two countries work seriously for resolution of Kashmir.

Mufti said the increasing support that the PDP is receiving from all sections of people throughout the state gives him confidence that his party would emerge as a vehicle of change that could help a resolution process gain acceptability from the people of the state. he said in absence of peoples acceptability no resolution could actually be effective.

Referring to the relationship his government had with its employees Mufti said he is proud to the civil servants of Jammu & Kashmir who constitute one of the best administrations in the country. He said it is his belief that whatever good through his government was able to do without the required capacity in our administration.

Mufti said the people of the state have to use their political discretion correctky be able to retrieve the loss that we have suffered in the past. He said there is no alternative to renegotiate of the terms with NHPC on the power projects executed by that agency. This he said is necessary if the state has to progress and provide decent living to its people. Similarly the Jammu & Kashmir Bank which was a tool of empowerment of the state has been reduced to a mere commercial concern by shifting to RBI. “We have a long struggle a head but it is possible to regain our rights only through democratic and constitutional methods”.

He said the government of India would go out of its way to find our proposals in view of the capacities that we had built which is in contrast to the present situation when the state has failed in executing even the normal plan.  He said the reported loss of Rs =2100 crores during the last financial year on account of the inability of the state government is a serious development and it is becoming increasingly clear that this government has flopped even in routine functioning”, Mufti said.