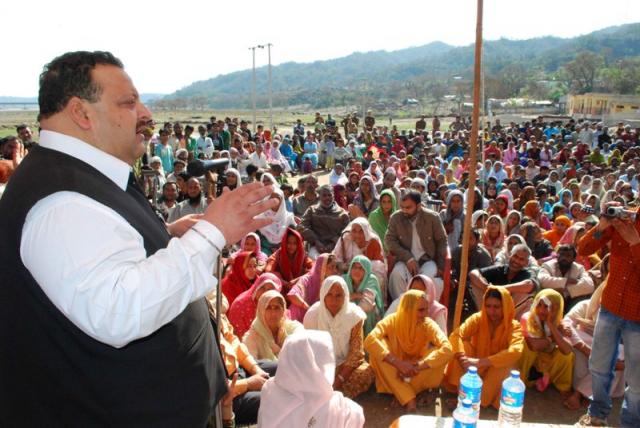 Jammu, March 10 (Scoop News) – Political Advisor to Chief Minister Devender Singh Rana today said that National Confrence party has sacrificed a lot for the unity and integrity of the state and will continue to do so in future as well to uphold the sanctity of the state and work towards the equitable development of all the regions and sub-regions of the state

Rana said negative political forces have occasionally thrived on dividing people of on the basis of language, religion, region, caste and creed but their gains have always proved to be shortlived. He said that it was because of these strong fundamentals of National Conference and support of huge majority of people thereto, in all the three regions of , and Ladakh, that all these negative political forces had disappeared quickly –be that 2008 or 2010.

He said that this strong cultural ethos, common to people of all regions and religions, could survive all testing times in future and bring home bitter lessons to parties like PDP in Kashmir and BJP in . He said that the state coalition government headed by Chief Minister Omar Abdullah had an exhaustive vision for comprehensive development of the state and a huge amount of money was being spent on development in different sectors particularly MG NAREGA which had a tremendous potential of providing employment to the working class. He said components of the centrally sponsored flagship schemes were being dovetailed with coordinated participation of the Rural Development Department and job-cards holders.

Rana advised the people to formulate Self Help Groups to ensure smooth and speedy progress of the developmental schemes.

Addressing the gathering Provincial President J&K National Conference Jammu province Rattan Lal Gupta said the stage is all set to hold Panchayat elections. He said a panchayat election provides an opportunity to the people to be an important part in the plan formulation and implementation of schemes at grassroot level.

Rattan Lal Gupta called upon the people to come forward and take active part in these elections in huge numbers to elect their representatives. He said panchayats would be effective tool to give new dimensions to the development of villages.