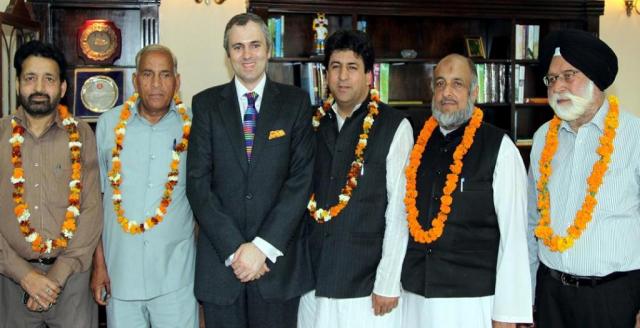 Omar Abdullah said the victory of the coalition candidates is vindication of the complete cohesion between the two parties. He said the future challenges on development and other fronts would be tackled in same spirit and unity.

“The smooth and thumping success of all the candidates of coalition partners in Legislative Council elections has completely rejected the speculations circulated by some quarters in this regard”, he said and added that all prophecies and rumours abut it have been nullified and proved false by the unison and complete coordination depicted by the two parties. He said the strong ties between the two parties were in the larger interests of the State and its people.

The Chief Minister was speaking to party workers at Sher-i-Kashmir Bhawan at a felicitation function organized for the National Conference candidates elected in the Legislative Council elections.

Omar Abdullah said that the nomination and success of senior stalwarts and close associates of Sher-i-Kashmir Sheikh Mohammad Abdullah in the Legislative Council elections was the recognition of their contribution and service to the party and the State. “The combination of young and senior workers is imperative to carry forward the agenda of the party with energy and experience”, he said and added that National Conference has always recognized its grass root workers both young and senior as the fountain head of power.

“We are committed to empower general public and involve them in the process of development and political stability in the State”, he said adding that transfer of power from the Secretariat down to grass roots was the determination of his Government. He asked the NC workers to work with spirit and dedication for the betterment and prosperity of the State.

Omar said that National Conference has always stood for the amity and harmony between all sections of the society and solidarity of the State. “The slogan of Hindu, Muslim, Sikh, Itihaad (unity) raised, nurtured and propagated by Baba-i-Kaoum, Sher-i-Kashmir Sheikh Mohammad Abdullah is the benchmark of NC’s policy and political discourse”, he said and vowed its further cementing and concretizing.

Omar Abdullah asked the winning candidates to dedicate themselves to public and work for the cause and upliftment of people.