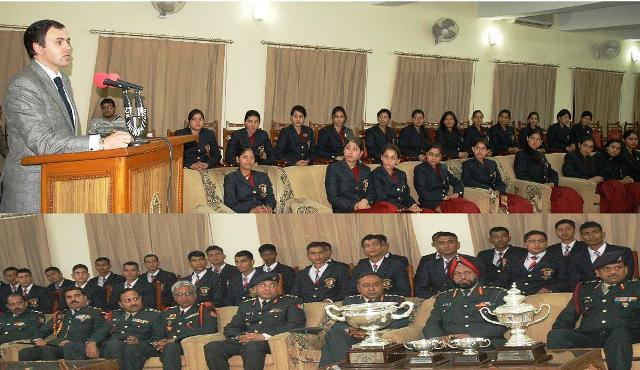 Highlighting the role of NCC in shaping young minds, the Chief Minister,  Omar Abdullah Monday said that the sense of purpose young boys and girls imbibe as members of National Cadet Corps guides them throughout their life and prevents them from going led astray. “Present day TV, cinema and internet scenario provides different sketches of life styles to the youth and there is every possibility for them to take wrong steps. However, the discipline, moral education and good conduct the young boys and girls assimilate as cadets prevents them from taking any wrong decision”, he said suggesting large scale participation of students in the NCC programmes.

Omar was addressing NCC contingent which took part in this year’s Republic Day Parade at on 26th of January and called on the Chief Minister here to brief him about their performance.

He said the NCC uniform makes the cadets responsible, honest and hardworking persons and inculcates in them the spirit of love, public service and zest to achieve laurels for them, their parents, for the state and the country. “The uniform educates you about the basic human values and polishes your personality in all respects”, he told the cadets and advised them to practice the high principles they get from NCC training in their day to day life.

The Chief Minister lauded the cadets for getting 9th position and receiving special prizes at the Republic Day Parade this year and expressed hope that within next couple of years the J&K cadets will scale to the pinnacles getting first position in the event. He also praised the replica of the 26th January scintillating cultural programme presented by the cadets before the Chief Minister here today depicting the history, geography, people, tourism, culture, heritage, handicrafts, art, fruits and agricultural practices of the people of , and Ladakh. “In a 30 minutes performance you exhibited all beauties of , and Ladakh in most befitting and artistic manner”, he said praising the NCC cultural group.

The Deputy Director General of NCC, , Brigadier, Anil Gupta while presenting the trophies and cadets led by Contingent Commander, , Arun Pandey to the Chief Minister, expressed gratitude to  Omar for his patronage. He gave resume of the prizes won by the contingent as a team and its members as individually. He said that the J&K Directorate of NCC secured 9th position this year against 16th position last year and received special trophy for highest improvement in the performance.