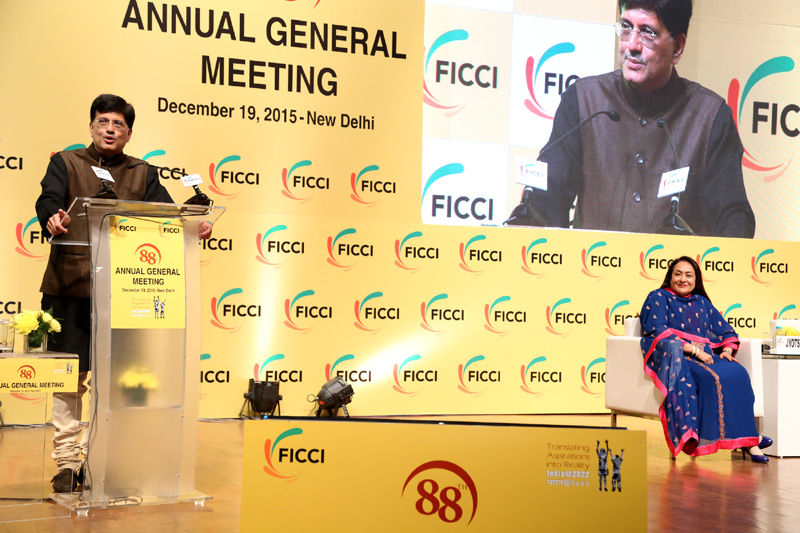 Speaks At FICCI AGM On ‘Translating Aspirations Into Reality – India @ 2022’

New Delhi (PIB-GR-TYP-BIN): NDA Government’s strategy in the past 19 months has been minimum government – maximum governance , de-bureaucratisation and people empowerment . Mr. Piyush Goyal, Union Minister of State (IC) for Power, Coal and New & Renewable Energy said this while speaking on ‘Translating Aspirations into Reality – India @ 2022’ at the FICCI 88th AGM on December 19. ‘It is a matter of delight that people expect so much from our government . you only expect results from those who can delive’, Mr. Goyal added.

Assuring the industry that the development process will not be allowed to suffer , the Minister said, ‘irrespective of what happens in and outside of Parliament development will not be allowed to suffer’. On power generation side , Mr. Goyal said that we have enough surplus capacity to support other investments . Regarding Renewable Energy sector, he said, ‘this Government has not shied from extraordinary targets , we plan to achieve 5x in next 7 years ‘.

Expressing confidence that every state will join “UDAY” (Ujwal Discom Assurance Yojana) , Mr. Goyal said that turning around DISCOMS is our challenge.

Filed under: Energy, News
Share Tweet Pin G Plus Email
previous article: Sensing and The Display Mechanism of Aircraft Sensor Systems
next article: In the Pursuit of Subscribers: Carriers Will Monetize Mobile Video in Radical Ways in 2016