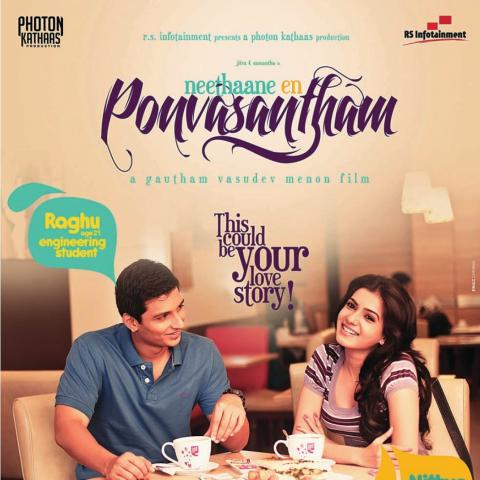 ~The trailer surpasses all records of the most viewed video ~

Chennai, September 7:Gautham Vasudev Menon’s much awaited movie Neethane En Ponvasantham, produced by Photon Kathaas and R.S. Infotainment, creates history as it has garnered more than 1.2 MN views of just the movie trailer in a short span of 5 days. That’s not all; the music video is the 5th highest song to be searched on YouTube. This response of the fans proves that the movie has already created ripples and is one of the much awaited movies of the year. The video went live on September 1st on Sony Music’s YouTube channel and since then the numbers have been increasing. Sony Music in the past has created path breaking records with Why This Kolaveri, Chikni Chameli and more.

Says Gautham Menon: “I am happy and at peace with the response. It’s been overwhelming to work with the legendary Illaiyaraaja sir on the music of this film and that is why this film is really special to me and hence this response to the trailer and the songs really makes me feel at peace within.

Says Ashok Parwani, Head South, Sony Music Entertainment, “It is phenomenal to see such great response from fans on the trailer as well as the music video. We have always been known for creating record breaking success on our digital platform and the movie’s trailer success will definitely make sure the music will also be a great hit. The combination of ace music director Ilaiyaraaja along with Gautham Menon promises to be a must watch and hear for all!”

Directed by Gautham Menon, Neethane En Ponvasantham is the quintessential love story of 2 people spanning 3 decades and captures the highs and lows, the pleasures and pangs of two people in love through the various stages of their life.