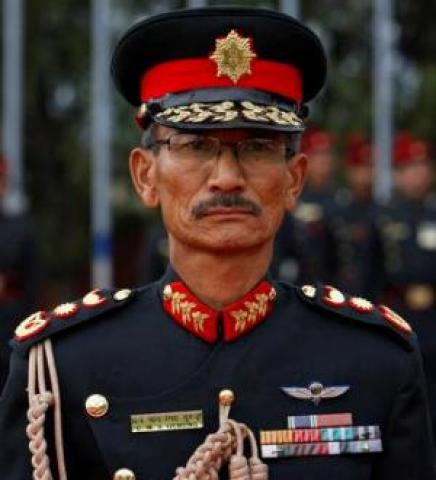 Nepal Army Chief Chhatraman Gurung leaves Kathmandu on  Saturday for the United States of America on a week-long tour. He has already made public that his visit is for attending a military conference in Honolulu.

Nepal government, at Gurung’s recommendation, has handed over the Army Chief’s acting responsibility to Toran Jung Singh until the Army Chief returns home.

Singh is in the list of Rayamajhi probe commission report in which he is charged with playing a leading role in the mass disappearance of dozens of Maoist detainees from the Bhairabnath Barrack—often cited by human rights institutions, local and international.

Maoist Chairman and former Prime Minister Prachanda had resigned in May when President Dr. Ram Baran Yadav, who holds no executive power at all, reinstated the previous Army Chief Rookmangud Katawal whom the Prachanda-led government had sacked for his defiance against the elected government. Gurung succeeded Katawal after he retired.

Gurung is the first Army Chief belonging to the indigenous community background. He has already graduated in military studies from US Command and General Staff College, Leavenworth in USA.

Filed under: Politics, World
Share Tweet Pin G Plus Email
previous article: Towards a compromise on the name dispute?
next article: Ex president Joseph Estrada reporting for duty in 2010?