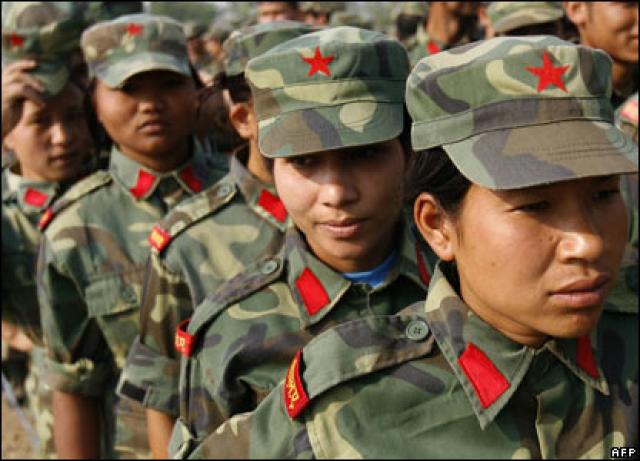 Following the handover of the Maoist-led People’s Liberation Army (PLA) to the government -"led special committee through a special ceremony on Saturday, numerous welcome comments have poured from local and international institutions and individuals. Both government and Maoist party leaders have mentioned the handover as a milestone.

The US, China, India and other nations have welcomed it as a major step in Nepal’s peace process.

On the PLA handover to the Special Committee, Maoist party Chairman Prachanda remarked "PLA has now become a security organ of the state. It should play an important role in national security." He and caretaker Prime Minister Madhav Nepal jointly signed the handover document at the presence of national and international representatives. The Nepal government and non-Maoist political parties in Nepal have emphasized on the fact that the PLA handover to government-led special committee means the complete state control over former Maoist fighters and their total political and military detachment from the Maoist party organizations. They have started describing the handover event as the final authority to disarm the former Maoist fighters. The Nepali Congress (NC) and the Unified Marxist-Leninist (UML) have only mentioned them as problems of the peace process rather than as contributors to the democratic changes in Nepal. They are likely to misunderstand this PLA handover–especially in the light of the UNMIN departure from Nepal on 15 January 2011 and the immediately accelerated role of India–as the authority for forceful disarmament of the former fighters.

Contrary to the understanding of the government is that of the PLA Chief Nanda Kishor Pun Pasang. He states, "Chain of command and arms will remain with us so long as the integration and rehabilitation process will not be concluded." He further stresses that the PLA leadership until the conclusion of the peace process. This shows that Maoists understand their participation in the peace agreement not as a surrender while their opposition forces understand just as the opposite. For example, both NC and UML top leaders have time and again asked the Maoist leadership to immediately handover their arms to their government without implementing the provisions of integration and rehabilitation clearly stated in the point 4.4 of the Comprehensive Peace Agreement (CPA).

However, Maoist Party Chairman Prachand has expressed his satisfaction at the recognition of his PLA by the government. He believes that this handover will give the world a message that the PLA will be a component of the government security framework in Nepal.

This handover definitely is a step ahead in Nepal’s peace process. To make it a final success, the Maoists, the Nepali Congress (NC), the Unified Marxist-Leninist (UML) and the Terai-based parties will have to work with the full commitment to the CPA signed between the Nepal government and the Maoist party on 21 November 2006.

If the NC and the UML, who still refuse to accept the former Maoist armymen as a peace agreement element to be integrated into government security mechanisms, understand and interpret the PLA handover as Maoists’ surrender, problems will remain as they are. Similarly, if Maoist leadership misunderstands this PLA handover as their victory over the existing status quoist forces in Nepal, problems will remain as they are. There are differences in understanding and interpretation of the PLA handover, which need to be analyzed and synthesized.

It is true that Maoist leaders, after they were able to experience government power under their leadership, have shown their high level greed for government leadership despite their minimum homework for leading Nepal’s overall transformation process. They have surprisingly shown little interest in the mass sufferings of the working class people being extremely exploited by the mafia-natured markets marked by chaotic profit margins ranging from 100 to 1,000 percent. But they have not bothered to play an opposition role while they have heavily concentrated on their bargaining exercises to lead the government.

In principle conforming to the basic philosophy of democratic politics, it is not wrong for the largest elected party to seek their leadership. In abolishing feudal monarchy, the other parties had to follow Maoist agenda. This shows the widespread support that Maoist leadership has gained for their agenda. But in practical terms, they have failed to attend to the ground voices, still unheard and suppressed by village lords clinging to feudalism and hooliganism. Since the mass sufferings of the majority of poor people generate more contradictions and multi-layered conflicts, this situation is not less challenging for taking the peace process to a logical conclusion.

The CPA in its preamble stands for the Nepalis’ mandate for democracy, peace and progress. The CPA has considered not only the people’s anti-monarchy movement in April 2006 but also numerous historical and ever-going struggles since 1951. Standing on this basis, the peace process stakeholders, in the CPA document, have expressed their determination to carry out a progressive restructuring of the state with a view to fruitfully addressing the existing problems resulting from class, caste, regional and gender discriminations. All parties have time and again expressed their commitment to empower and mainstream ethnic minorities.

For the peace process to succeed in Nepal, it is compulsory for the stakeholders to concentrate on implementing the CPA point 3, which states about the political, economic and social transformation to manage conflicts. The conflict between the Maoists and their opposition parties is the major conflict yet to be managed. This is the major curriculum of the ongoing peace process.

Likewise, stakeholders need to implement the documented provision of progressive state restructuring (CPA 3.5) through a new constitution in order not to let the peace process derail. The existing privileged rulers themselves are the chief barriers to state restructuring because they fear their sweep from their hereditary ruling space. For this reason, confrontations may result in the process of implementing the peace agreement provisions.

Since Maoists have joined the mainstream peace process by depositing their arms and fighters in the cantonment on condition that their agenda be addressed productively in the new federal-republican constitution, the Nepalis are not likely to be happy with a constitution that is similar to the previous one. In this context, the CPA is progressive as it includes the major ingredients for the overall transformation of the Nepali society. But the mindset of the peace process stakeholders does not appear as progressive as they need to be. Their continuous struggles focus on government formation has overshadowed the fundamental agenda of the peaceful transformation of the Nepali society.

More challenging in Nepal’s peace process is how to democratize the Nepal Army (previously known as the Royal Nepal Army). Long-trained in feudalistic traditions with overwhelming loyalty to an individual–the King traditionally considered as an incarnation of Lord Bishnu, the Nepal Army requires time and patience to transform itself. However, the mindset of the major peace process stakeholders can be a chief determinant for the rapid democratization of the government defence force. The instance of defiance by the former Army Chief Rookmangud Katuwal against the elected government leadership in 2009 is enough to understand how tough it is to democratize and transform the monarchy-brainwashed leadership of the government army.

Equally important in making the peace process successful could be the political parties’ exercise to overcome their own prejudices, misperceptions and ill-culture of superficial speech-based politics instead of morally accountable and research-based work.

In conclusion, it would be logical to state that the PLA handover to the government-led Special Committee can ease the process of integrating and rehabilitating the former Maoist rebels. It would be harmful to misunderstand or exaggerate the handover because the stakeholders of the peace process have not yet agreed on the modalities of integration and rehabilitation. There are undoubtedly external players of regional and global nature, who will also influence the future course of plans and actions. Should the domestic players be honest and large-minded to change Nepal better, the transformative agenda set in the CPA and the Interim Constitution will not prove dead.

First published in the opednews