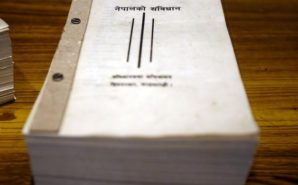 Nepal Government has announced 2 days public holiday 19 and 20 for the celebration of the constitution.  People at various locations were seen lighting candles and oil lamps expressing their happiness and welcoming the new constitution.
The BBC quotes, “Nepal has formally adopted a new constitution, nearly a decade after the country ended a long-running civil war.”

Though the constitution has been promulgated but the dissatisfied Madhesi and Tharu ethnic groups in the south have been protesting against the constitution and till now more than 40 people have been killed in a series of protest and agitation programs.

Nepal has ended 8 years of political uncertainty and chaos but with the Madheshi and Tharus fighting for a separate country, the country faces a huge threat of what lies next?

There may be a big achievement but the country has certainly taken two steps back facing a huge problem of civil war.