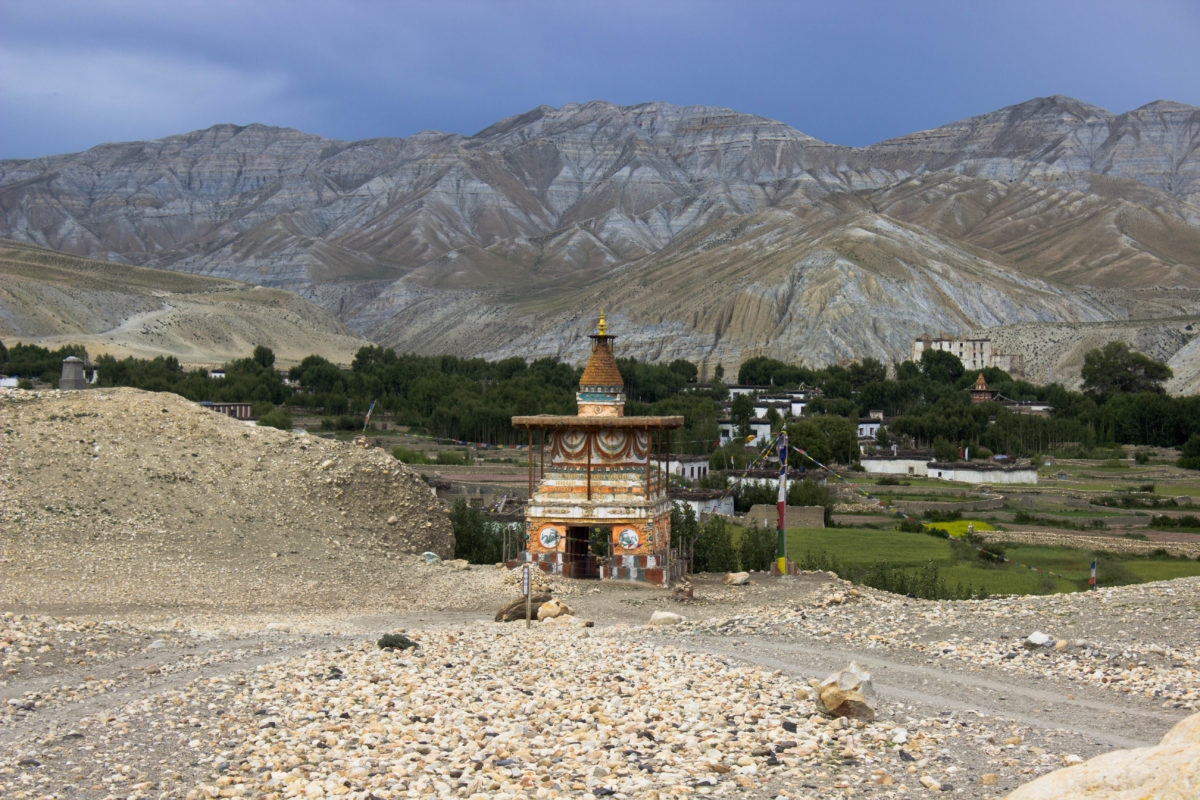 For anyone interested I recently did 14 days trek to Upper Mustang, often known as “The Last Forbidden Kingdom”. I agree that Lo Manthang is a Little Tibet, as the region have direct easy access to Tibet via Kora La Pass. My journey start with a long drive from Kathmandu to Pokhara. Initially the drive was supposed to nine 7 hrs, however due to road condition and traffic it took me complete nine hrs to reach Pokhara. Well, Pokhara is a perfect place to relax!

I stayed in Himalayan Inn hotel, located close to the lake. It is a nice budget hotel in town. I had booked a flight with Tara Airlines for Pokhara to Jomsom early in the morning at 6:30 am. Our plane board at 7:10 am. It was short but very scenic flight as it pass through the gorge of two eight thousand meter high himalayan rage, i.e. Annapurna and Dhaulagiri. Mustang is located beyond these himalayan ranges as a result the area encounter less rain. The landscape is dry and deserted, which is similar to highland of Tibet and Ladakh. After a quick breakfast in Jomsom I start my hike. The first day of my trek, I reach Chele. Normally the foreigner to save a day they stay in Kagbeni and enter Upper Mustang next day. For me as a Nepali I didn’t require a trek permit, so it doesn’t makes any difference.

I crossed several up and down and trek next to Kali Gandaki to reach Chele. On my second day I trek all the way to Syangmoche. The first pass that I traverse was Taklam La Pass, followed by Dajori La. I ate my lunch in Samar, a beautiful village. Finally after crossing another high pass of Yamda La I arrived in Syangmoche. Well it was three passes to traverse today. I check my upper mustang trek map, which I got from Himalayan Map House. Before buying this laminated copy of trek map, I was taking an reference from this online upper mustang trek map, which was a great help to plan my trip. 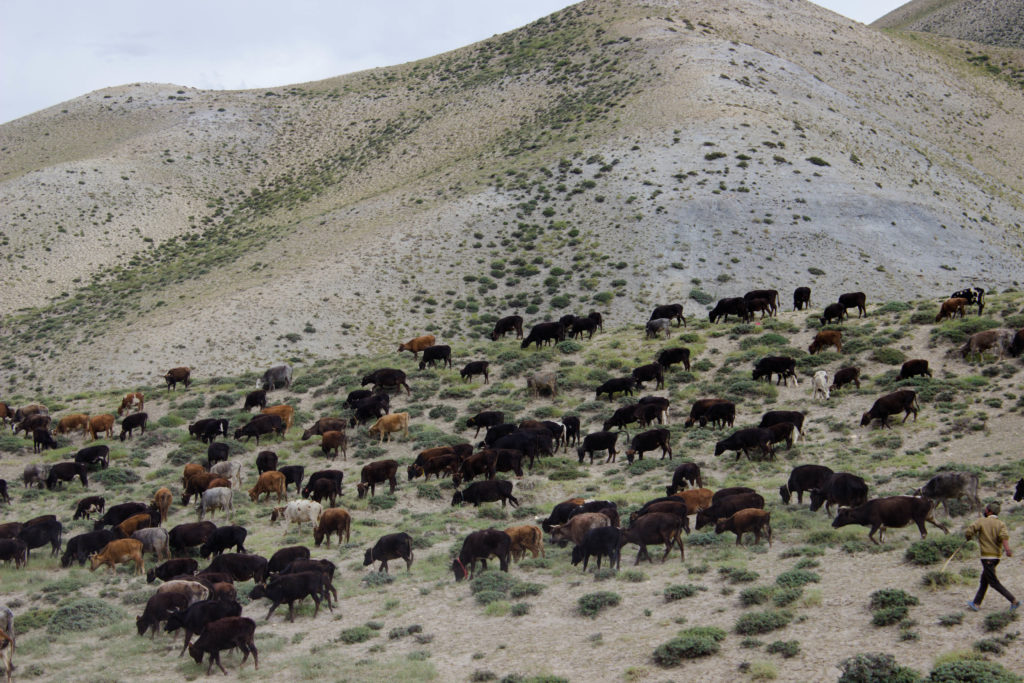 On my third day I trek to Ghaymi, which was a bit long walking day. I explored few monasteries as well including famous Ghaymi Gompa. I was already excited to be in Lo Manthang next day. I was tired after a long hike, so I went to bed quite early. This was another tough day with two high passes to be crossed, each 3870 m and 3950 m from sea level. Tsarang monastery is believed to be eight hundred years old. I had already booked my accommodation in Lo Manthang, so I was not in a rush. I was astonished by the aerial view of Lo Manthang from top of Lo La Pass. I sit there for a while, watching the amazing Kingdom of Lo Manthang. I just ran down to the valley!

I spend an entire day exploring the famous monasteries and king’s palace in Lo. It was an easy day, a day without my backpack! In the afternoon I rent a horse to go to village of Chhoser. It cost me around one thousand rupees to rent a horse, one way from Lo Manthang to Chhoser. Both the monastery and cave were closed, as it at already dark! 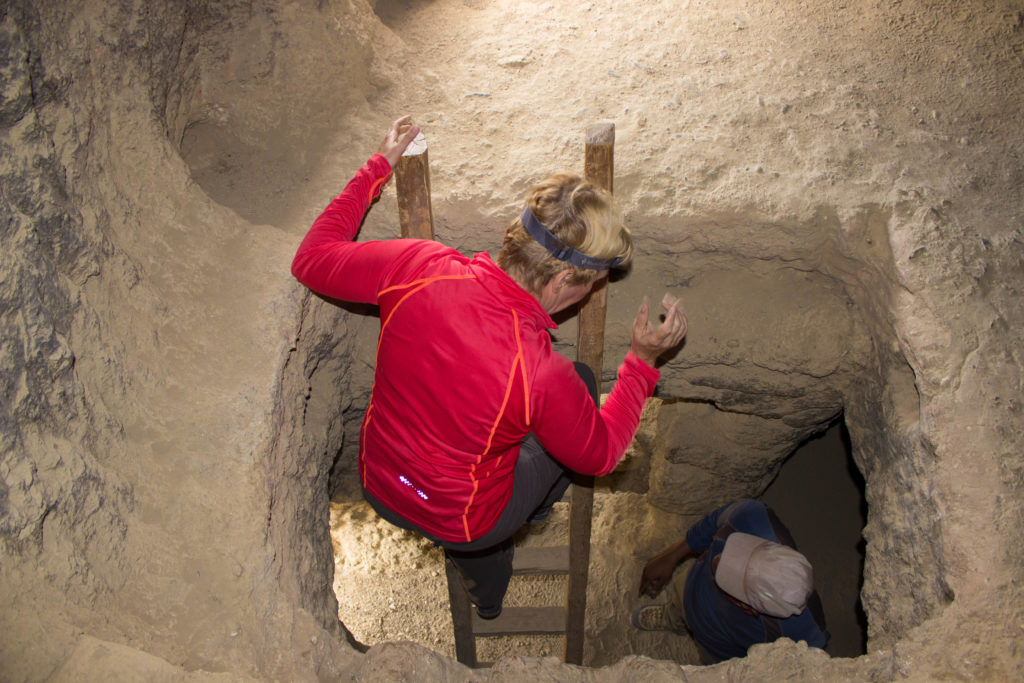 I start my day with Jhong Cave. This is a wonderful and mysterious cave with four floor and fifty plus private rooms. Yes, it is amazing and mysterious at the same time. I cannot imagine how the cave was built, was it natural or man made cave? The fort window in the top of cave provide a wide view of entire valley underneath. There was a utensils in a display, which was supposed to be used by a local who lives in this cave a long ago. The monastery in the Chhoser is also seven hundred years old. All the wooden interior of monastery made me think, how they build this? There are no tree in Upper Mustang (Almost not at all!) and all these internal pillars of building are made of big log of tree.

In the mid day I hike back to Lo Manthang and ask to reserve a seat in jeep for going back to Jomsom. There was no direct jeep, I changed jeep in three places to reach the Jomsom. My flight was only the very next day, so I went to Tara airlines to reschedule if possible. Luckily there was a vacant seat left.

I fly from Jomsom to Pokhara and wait in the airport for three hours to catch connecting flight to Kathmandu. 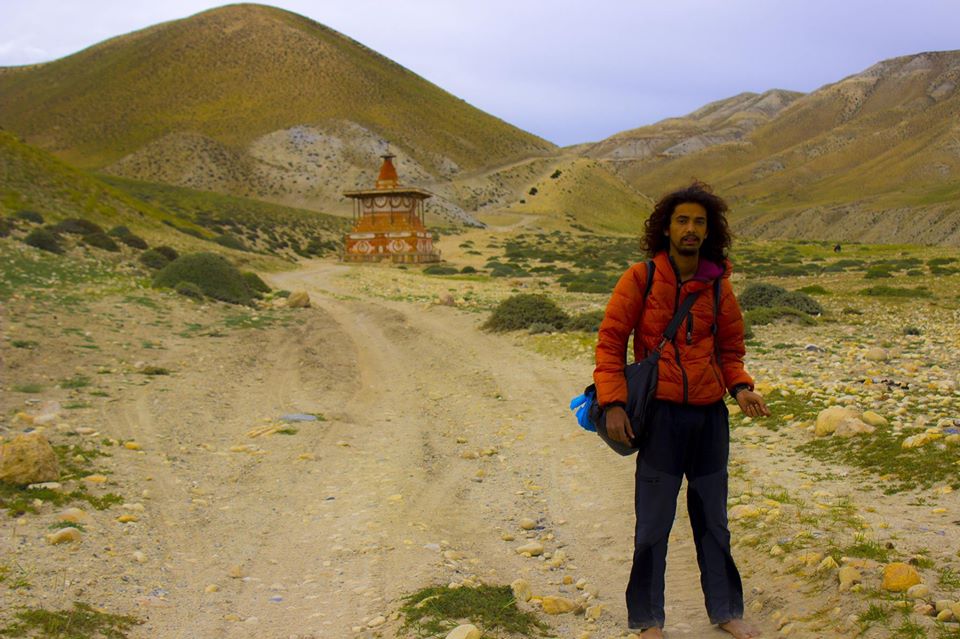 That is me standing in front of Suganda Chorten on my way to Lo La Pass.

Pro tips: Book your Kathmandu Pokhara Flight with yeti airlines. This is because in case if your flight from Jomsom to Pokhara is delayed or postponed (This Jomsom Pokhara Flight should be in Tara Airlines) you can easily get refund or reschedule your Pokhara Kathmandu Flight. Remember Tara Air and Yeti Air are owned by same owner, Tara is a sister concern of Yeti Airlines.

Filed under: Lifestyle, Travel
Share Tweet Pin G Plus Email
previous article: Social Media as a Key to Fundraising Success
next article: The Real Consequences of Driving Under the Influence