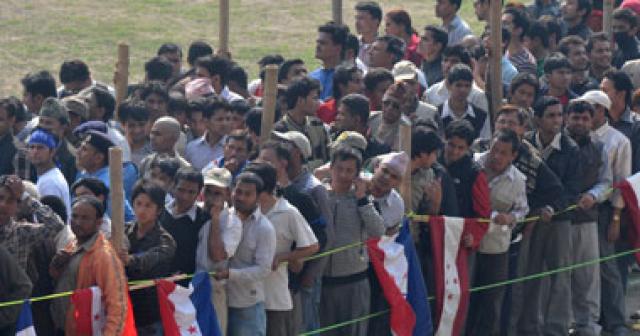 Thousands of Nepalis on Sunday paid their last tributes to ex-Premier Girija Prasad Koirala, who passed away on Saturday due to COPD. Mr. Koirala had been suffering from the disease for long.
Nepal’s government cremates Koirala’s dead body with a state honor.

Although he was extremely hostile and intolerant to Marxist forces in the 1990s, he became a key player in the field of peace process towards the end of the decade. He was the one who agreed to take up the leading role in signing the Comprehensive Peace Accord with Maoist insurgents on 21 November 2006. The Maoist insurgents had been fighting against the monarchist rule for 10 years before they agreed to adopt a peaceful approach of politics through a 12-point understanding signed between themselves and the Seven-Party Alliance (SPA).

This reporter talked to some educated men and women in the streets for their brief remarks on the demise of ex-Premier Girija Prasad Koirala. Rita Bhujel, a woman owning a teashop at Baghbazar said, "His life could not sustain till the completion of the drafting of the new constitution. That was what I had expected at least. Similarly, Bigyan Sanjel, a high school teacher thinks that the Nepalis should look forward to the end of the country’s conservative politics based on flattery and hypocrisy."Far-sighted leaders must come forward to lead Nepal," he adds.

Stating that Koirala was a front player in the country’s peace process, Rom Lal Maharjan (he said he was a Maoist supporter) praised Girija Prasad Koirala for firmness in his opinion, which he would not change so easily. He stressed, "Many other leaders frequently change their opinions for immediate gains."

Vinayak Shakya, a software engineer, has a unique opinion on the demise of Koirala. He states, "Although the media have published their stories as if Nepal loses everything after the demise of Koirala, I don’t think this is the fair way of doing journalism. There are many other leaders who can do better by learning from Koirala’s quality of self-determination."

Asked how a citizen with political education could view Koirala’s demise, Sajina Tuladhar, a student of political science and a local of Kathmandu tries to anayze the case in her own style. She remarks, "Every human being has some sorts of strengths and drawbacks. So did Koirala. His greatest strength was that he was a man of firm resolution. He was not vacillating in his decisions. I think his greatest weakness in politics was that he focused his almost whole political life on his own dynasty—Koirala dynasty."

A different piece of analysis came from an ex-Nepal Armyman. Nara Bahadur Giri, now a security worker in Kathmandu anticipates power struggles within Nepali Congress Party. He calculates, "Nepali Congress is likely to face much crisis since there is a culture of centering their politics on a few elitists."

The demise of Girija Prasad Koirala, who underwent more than six decades of political ups and downs in Nepal, definitely counts emotionally, politically and pragmatically. But the left ones must work more innovatively and collectively to transform Nepal rather than to ruin the country through petty politics. This is the immediately felt challenge following the death of Koirala—the oldest and the most active player in Nepal’s politics.

Filed under: Politics, World
Share Tweet Pin G Plus Email
previous article: Uproar over Anwar’s attempt to use the King’s name.
next article: CPI(M) proposes converting J&K into a ‘real federation’ to empower the people with powers