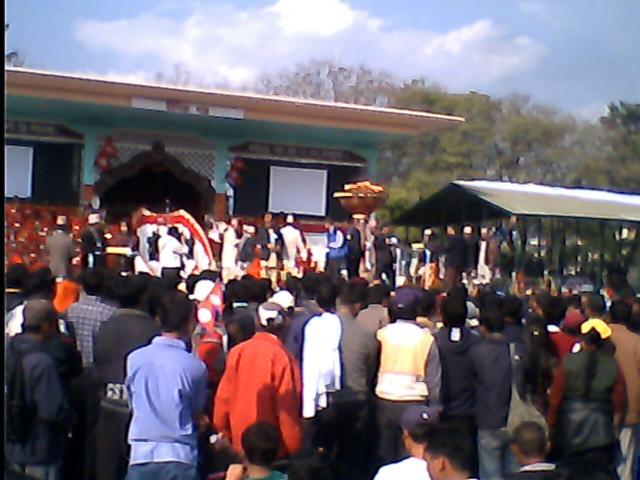 Kathmandu, February 26, 2010: Nepal’s Prime Minister Madhav Kumar Nepal officially launched the Nepal Tourism Year 2011 (NTY 2011), a tourism promotion campaign by lighting a peace light here among thousands of spectators in Army Pavilion Ground in Tundikhel Kathmandu. The torch was brought all the way from Lumibini the birth place of Gautam Buddha where it was carried on a rally by athletes on foot.
The campaign is theme “Together for Tourism” which is expected to draw more than one million tourists during its period.
Speaking at the launch program, Prime Minister Nepal said, “Tourism has played a key role in the economy where it acts as a strong pillar of development. With creating better opportunities of employment, community development, and income generation, this sector has propounded a new economic revolution which can and has the power to bring change.”
Highlighting that Nepal also said, “This campaign is not just a campaign for the Government of Nepal or the Nepal Tourism Board (NTB), it’s a campaign themed for the overall development of the country where all the sectors should play their part in making it a success.”
He also called upon all the political parties to come on a common ground to stop calling strikes (Bandhas), during the campaign period. Nepal also mentioned that Nepal is rich in Natural beauty and resources, which needs to be further explored and properly channelized for the development of tourism and the country.
Sharat Singh Bhandari, Ministry at Ministry of Tourism and Civil Aviation (MoTCA) said, “The NTY 2011 Campaign is launched with the theme of Together for Tourism aiming at economic revolution through different measure of tourism where the entire sector including the political parties should play a crucial role in creating better future prospects.”
Yogendra Shakya, National Coordinator of the NTY 2011 said, “Nepal’s Tourism has seen both good and bad days and now the good days are once again back. We are ready to create a new image of Nepal with the passion and enthusiasm to give the world the ultimate travelling destination. We are ready to host 1 Million tourists where we can and we are capable of handling them, and we just need the support and cooperation from all the sectors.”
During the launch program, more than 18 political parties and their leaders showed their commonality and support toward the campaign. Similarly, different tourism association, tourism entrepreneurs, and social figures also confirmed their solidarity toward the campaign.