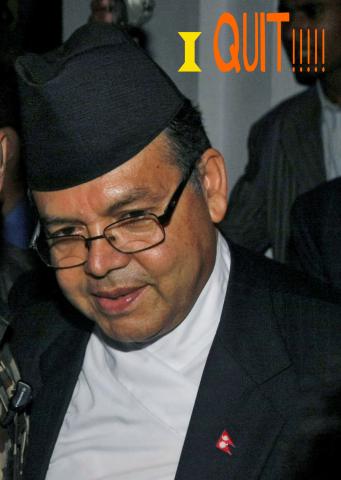 Kathmandu August 15: Early morning the country buzzed with the resignation of the Prime Minister Jhala Nath Khanal . The Prime minister submitted his resignation to President Dr Ram Baran Yadav  with the acceptance of not being able to facilitate the peace process on Sunday evening.  Khanal was supposed to face the Constitution Assembly Members with the future plans on Monday where he forwarded his resignation on Sunday evening. The decision came in action after senior leaders of his party Madhav Kumar Nepal, KP Oli and General Secretary Ishwor Pokharel, advised him to quit from his power.

From the past six month there has been no progress in the peace process where the special committee formed under his leadership was given the task to find solution and to show proper directions to the peace process by August 10 which he exceeded. Khanal was seen very much struggling trying to facilitate the main issue where he was seen trying to find solution with political understanding until Sunday morning. But when the talks could not advanced to the next level he had no choice except to step back and he forwarded his resignation.

With the resignation of the prime minister once again Nepal’s politics has landed itself to the scenario of uncertainty and chaos. As with limited understanding and lack of cooperation it is not yet clear regarding the new leadership and a new government.  One thing is for sure that Nepal certainly searches new leadership but at the cost of what is the question that impedes the nation.