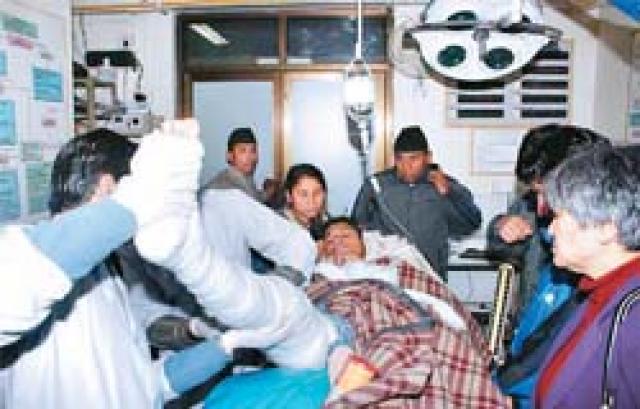 The Prime minister’s secretary Shakti Bahdur Basnet was shot by an unidentified group on Monday night (February 9, 2009) at around 7: 35 PM near his residence in Koteshwor where he nearly escaped his life with serious wounds on his right leg, stated the prime minister office
Meanwhile, after the attack Basnet was rushed to B& B hospital at Satdobato, Lalitpur, where he was treated for the gunshot wounds and now is in a recovering state.
According to eyes witness the shooters fired five rounds of bullets where they had covered their faces with a black scarf and till now no party or no person has claimed the attack.
Shakti Bahdur Basnet 39 is the Maoist politburo member where he was appointed to secretary of the Prime Minister after the formation of the new coalition government.
The Prime Minister Pushpa Kamal Dahal on Tuesday said “This is the plan to hinder the ongoing constitution drafting-process where the illegal elements want their presence to be felt. The attack was a coward act to divert the government attention and the government would not be distracted by such acts.”
“A thorough investigation is under way where the culprits would be brought to books,” added he.