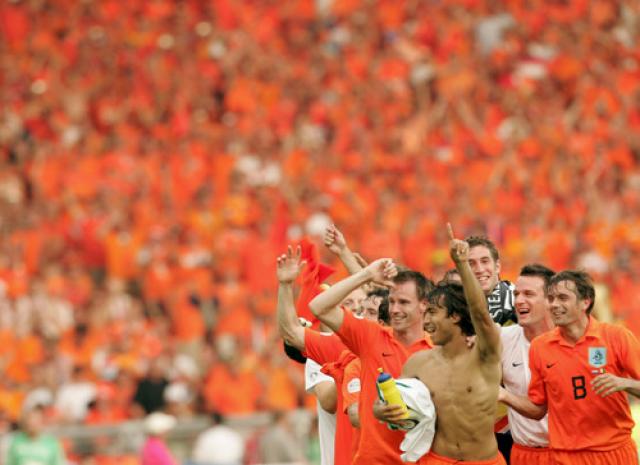 Holland football fans will sleep well tonight after putting Italy snugly away 3-0 in their opening match.

Liverpol FC winger Dirk Kuyt connected with Van Nistelrooy in the 26th minute, setting up a thundering volley past Italian keeper Gianluigi Buffon to put the Dutch up 1-0. Van Nistelrooy looked to be clearly offsides where he tapped the ball into the back of the net, but replay showed an Italian defender that lay beyond the goal-line after colliding with Buffon seconds prior to the goal.

In the 33rd minute, Wesley Sneijder capped off one of the most exciting counter-attacks in the tournament thus far to put Dutch up 2-0. Italy had come close to equalizing from a corner kick on the other end of the pitch, but the Dutch quickly capitalized on Italy’s vulnerable defense. The ensuing advantage run from the Dutch clearance found Giovanni Von Bronckhorst sprinting wide open down the far side of the pitch, who had come from clearing his line nearly seventy yards to feed a long cross to Dirk Kuyt on the edge of the eighteen yard box. Kuyt tapped the pass from Von Bronckhorst to the feet of Sneijder, who volleyed the shot past a helpless Buffon.

The Dutch looked much brighter and hungry for the ball throughout the first half, while the Italians could not establish a rhythm from the get-go. The Azurri found a slight spring in their step in the second half, with substitute striker Alessandro Del Piero putting two good shots just high above the crossbar and winger Fabio Grosso firing just wide of Dutch keeper Van der Sar between the 65th and 75th minutes.

Van der Sar came up with a brilliant save in the 76th, diving to his right to save a curving free kick from Andrea Pirlo from thirty yards out. Then, the Dutch broke loose with their counter-attack. Van der Sar found substitute Robin Van Persie sprinting down the left side in a three-on-three breakaway, who crossed to Dirk Kuyt on the other side of the penalty box. Kuyt fired straight into a charging Buffon – only to have it come back to him. The twenty-seven year old chipped it across the box to Giovanni Van Bronckhorst, who headed the ball neatly into the goal to seal the 3-0 victory.

Dutch manager Marco Van Baasten, himself a Dutch football legend from the 1970’s, could not have foreseen such a start to their tournament. His side had been unable to beat Italy since 1978, and Gianluigi Buffon had only given up two goals in seven matches during the entirety of the 2006 World Cup in Germany. Meanwhile, Italian captain Fabio Cannavaro, out for the tournament with a knee injury, looked on glumly as his side appeared fatigued and unable to mount a successful comeback.

The Netherlands now stand alone atop Group C with three points, with the French and Romanians tied for second. Italy face Romania next on Friday – a must-win game should they want to stand any chance of remaining at the head of international football.