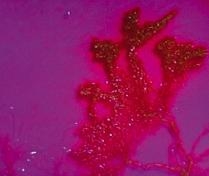 Networked Nature, curated by Marisa Olson of Rhizome.org, opened tonight at this W.
27th St. gallery. The show itself brings together works with hybrid visions of technology and nature, interweaving two themes which are historically – if artificially – made distinct in popular imagination. Yet in a show that brands itself as “networked,” Olson herself concedes, in the official description, that none of the works are explicitly such. Rather, she explains, these pieces are the product of a networked culture, one in which it is not so difficult to imagine integration of discarded Evian bottles into a many-armed sea creature.

Despite this logic, I found myself approaching each piece and attempting to read it as a
representation of our increasingly distributed states of being. The very premise of technologizing nature (or, conversely, naturalizing technology), holds within it a reflection of our own physical, informational, and biological reliance on machines that so often border on the prosthetic. In a clearer view, however, the pieces managed to avoid explicitly addressing networks as a concept.

After making my way through the crowded floor space to the requisite Budweiser at the
back of the gallery, I began my visit with Stephen Vitiello’s Hedera (BBB). As ivy climbs about six feet up the white gallery wall, it becomes entwined with gold wires feeding heavily distorted audio clips of George Bush and Tony Blair into small black speakers among the leaves. The gossipy conversation of the couple beside me (an interested analysis of “Rob’s” newfound obsession with scarves) just managed to drown the sound of the work itself, but the piece’s attention to the “network” theme seemed overly reliant on the aestheticized vision of distributed networks. Seen in the context of the show’s title, Vitiello might appear to grasp at the image of unruly intersections and tangles of ivy and wiring alike (Hey! It’s like a network!), but in the case of the pieces at the show, the titular context can be misleading. Viewed without this crutch, Hedera manages to draw an interesting parallel between the natural functions of ivy – which both creates and consumes space-defining walls – and the mediated functions of international political speech – both public and private.

Self-consciously alone – and thankful for the beer – in a gallery full of couples and groups, I pushed past several more conversations to stand in
front of Philip Ross’ Juniors and eavesdrop on the artist’s explanation of his work to an aristocratic but kindly looking gentleman. Small plants encased in glass tubes half-filled with nutrient-infused water were attached to what looked like time-bombs, yet they turned out only to count down to the moment that a green foam ball in an adjacent container released a flurry of bubbles (presumably to provide the plant with CO2?). As two women to my left were keen to note, this was "the prettiest piece in the show" (they claimed they could imagine it in their living room). The glass tubes at once revealed and contained the life processes of the plants, making their reliance on the ever-descending clocks almost threateningly clear. With the exception of one, each machine/plant was connected via thick, black wires to a large, heavy-looking battery – also in a glass case. Again, I slipped into the “network” theme as a frame of reference and saw at once the work’s denial of the natural root-network through the explicit containment of the plants, as well as the dominating centralized network of the battery-plant relationship. To view Juniors along these lines paints the picture of a networked society in its most brutal and repressive future, despite the apparent living room appeal about it.

I made my way through the quickly crowding space to view the other pieces, the
usual suspects for a new media art openings stepping through the door and making, as I had, a direct line to the logical location of the drinks. It seemed that despite Olson’s claim that the individual pieces may not have been entirely networked in their intent, the opening itself served as a representation of a particular “networked nature.” Yet this networked nature has only tangentially to do with locative media, photosynthesis, or psychedelic mold; this display of network culture flowed around the gallery-as-node, a demonstration and self-conscious critique of a socially, educationally, and technologically interconnected class.