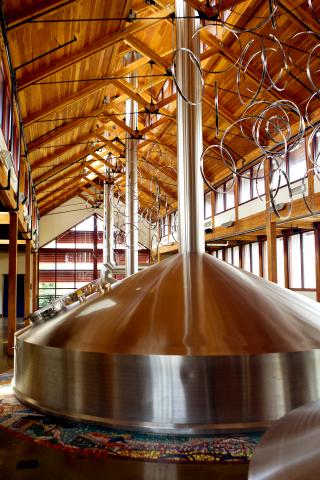 New Belgium Brewing announced today that Asheville, NC has been selected as the new location for a second brewery. The 400,000-barrel brewery and packaging facility will provide New Belgium with additional capacity allowing the Colorado-based brewer to expand into new areas of distribution. Upon completion in 2015, the facility will initially create 50 new jobs in the Asheville area with more than 100 positions expected at full buildout.

“After several years of searching we are incredibly excited to have landed in Asheville,” said Kim Jordan, CEO and co-founder of New Belgium. “From the deep sense of community to the rich natural environment and the opportunity to revitalize a brownfield site near a vibrant downtown, Asheville has everything we’ve been looking for in a location for our second brewery.”

The 17.5-acre site located in the heart of the River Arts District will accommodate the 150,000 sq. ft. facility. The brewery will feature a 200-barrel brewing system, a tasting facility, and a process wastewater treatment center on-site. Tours will be available to the public. Total cost projections are over $100 million.

“Today’s announcement by New Belgium will enhance the craft brewery cluster that is growing in North Carolina,” said Gov. Bev Perdue.  “The jobs and investment the company is committing will be a major boon for the region and for the state.”

Construction is expected to begin in early 2013 with beer rolling off the line in early 2015. A full Asheville-specific press kit, a video statement from Kim Jordan and downloadable b-roll are available at http://www.newbelgium.com/files/presskit .