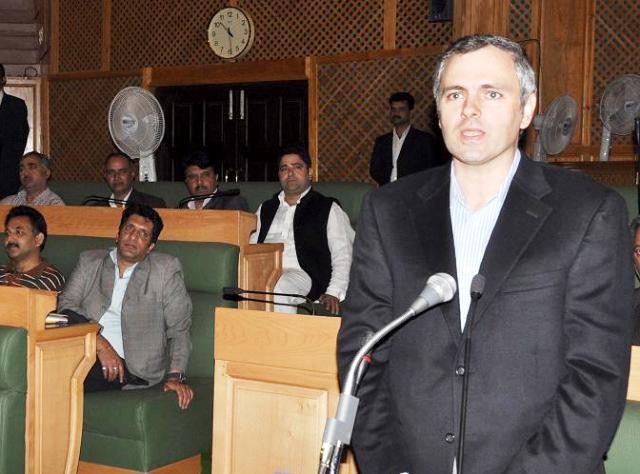 Srinagar, October 05 (Scoop News) –Chief Minister,  Omar Abdullah today said that new colleges would be established in accordance with rational data to be obtained after carrying out scientific survey in the State.

Intervening during question hour in Legislative Assembly today,  Omar said that number of feeding schools and discrepancy, if any, will constitute criterion for setting up these institutes of higher learning in the State.

The Chief Minister called upon the legislators to put up demands for opening of new colleges in their respective District Development Board meetings (DDBs), adding that issues related to introduction of new courses, faculty and management of colleges could, however, be discussed in the Assembly.

Measures initiated to upgrade health infrastructure-Reiterating government’s determination to improve Health care facilities in every nook and corner of the State, the Minister for Health,  Sham Lal has said that numerous initiatives have been taken for upgradation of health infrastructure and creation of more posts of doctors and para medics and filling up of vacant posts.

Replying to the supplementaries raised by some members to the main question of Mir Saifullah in the Legislative Assembly here today, the Minister said 9 districts of the State have been declared as backward districts for upgradation of health care facilities. These districts will get focused attention of the Government for augmenting infrastructure. For this 6500 new posts of medicos and para-medicos have been created under National Rural Health Mission (NRHM). The process of recruitment thereof is underway. He said out of newly created 1200 posts of medics recruitment of 466 posts have been made and were posted in various health institutions including those in remote and far off areas.

The Health Minister further informed the House that a full-fledged network of health institutions is in place in the rural areas, which include dispensaries, public health centers, community health centers and district hospitals and further expansion will be made purely on merit.

He said that health care facilities are being provided through these health centers as a priority area. “Though deficiencies of infrastructure and shortage of doctors is being faced, yet all out efforts are made to improve the infrastructure by utilizing all available resources and for augmentation of the medical and para-medical manpower”, he said and added that the health care facilities in rural areas have been improved considerably under the NRHM programme, which is in full swing in the State.

Giving details of manpower in health institutions of Kupwara district,  Sham Lal said that out of 237 sanctioned posts of Doctors, 160 are in position and out of 1306 posts of para-medics and others, 989 are in position. He, however, said that to cope up with the patient care requirement, the department has engaged 23 MBBS doctors, 31 ISM doctors and 128 para-medics under NRHM in the district.

The Minister said that the vacant posts of medicos and para-medicos are being referred to the PSC and SSRB for recruitment.

The Minister assured the House that all possible steps are being taken for overall upgradation of health care facilities across the State.