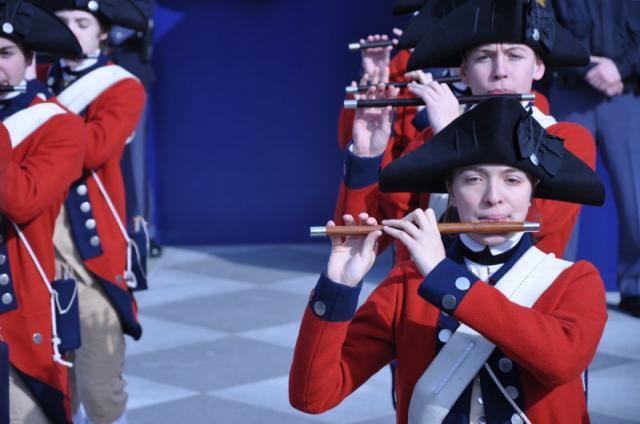 RICHMOND, Va. – On an unseasonably warm and sunny Saturday afternoon, Robert F. McDonnell was sworn in as Virginia’s 71st governor.

“I kept my first promise – I said that it would be warm and sunny on my inauguration day,” McDonnell said.

“As we confront the worst economy in generations, the creation of new job opportunities for all our citizens is the obligation of our time, so all Virginians who seek a good job can find meaningful work and the dignity that comes with it,” McDonnell said.

He spoke of the need to harness Virginia’s natural resources and, by doing so, create jobs. “We will make Virginia ‘the Energy Capital of the East Coast,’ ” McDonnell said.

After McDonnell was sworn in, the 29th Army Band struck up John Philip Sousa’s “Stars and Stripes Forever,” concluded by a Howitzer 19-gun salute and a flyover by four F-22 Raptors from the Virginia Air National Guard 192nd Fighter Wing.

Following the flyover was a performance of song and dance by representatives of eight Virginian Native American tribes and a parade featuring participants from more than 40 organizations.

Among the attendees was J.C. Cancelleri, a 53-year-old lawyer from Hanover who went to Regent University with McDonnell.

“I watched him go from the House of Delegates to attorney general to governor,” Cancelleri said. “It’s grand. It’s a beautiful day.”

“McDonnell talked a lot about the economic conditions, encouraging us to step up,” Robertson said. “It’s a new start … a new hope for Virginia.”

Bob Marcellus, a 45-year-old commodity trader from Goochland, was on McDonnell’s transition team.

“Bob is a forward-looking guy, I think he’ll be one of the most proactive governors we’ve ever had,” Marcellus said. “It’s a great day … I don’t think it could have been any better.”

RICHMOND, Va. – Lou McClellan said he loves Virginia – and that’s why he came to Bob McDonnell’s inauguration as the commonwealth’s 71st governor.

“I think he will unite the state and bring us all together from things that had separated us in the past,” said McClellan, a Richmond resident and longtime Republican.

He was one of thousands of people who converged on the Virginia Capitol on Saturday to see the inauguration.

“More importantly, I’m here as a friend to Bob McDonnell from day one,” Miles-Holloway said.

People who arrived early enough received tickets to sit in bleachers and watch the inauguration and the parade. Others stood on the Capitol grounds; they could view the proceedings on two giant projection screens.

“I’m here because I am a Bob McDonnell foot soldier,” said Jay Trinca, a Republican activist from Bath County. That’s where state Sen. Creigh Deeds, the Democrat who lost to McDonnell last fall, is from.

Curtis Stone and his wife and son drove five and a half hours from Bristol, Va., on the Tennessee line, to witness the inauguration.

“It’s the first one I’ve ever been to,” Stone said.

Filed under: Politics, US
Share Tweet Pin G Plus Email
previous article: Aid to Haiti: Nigeria, South Africa and African Union should work together
next article: Politician stressed upon to play Role in implementing of Human Rights Laws