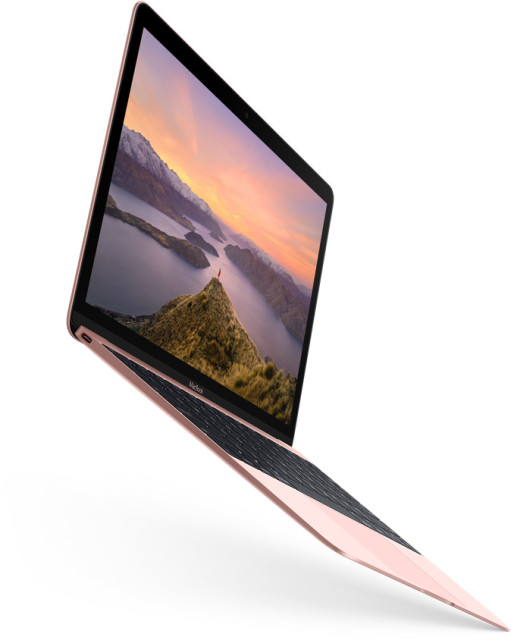 A year after the initial release of the Retina MacBook Apple just released a new version presented. This will get a better processor, faster graphics chip and a battery with longer life. Moreover, there is a new color! In addition to silver, gold and gray space, the MacBook now also available in rose gold.

The new processors are the sixth generation of Intel Core M series. The cheapest variant has a 1.1 GHz processor, the most expensive 1.3GHz. With Turbo Boost speeds are achieved between 2.2 and 3.1 GHz. In addition, the memory has been upgraded to 1866 MHz modules (first 1600 MHz) so the MacBook again is slightly faster.

Also to graphics makes the MacBook a step forward. The new graphics processor Intel 515 is about 25 percent faster than its predecessor. Now that’s still not comparable to a MacBook Pro, but the Intel 515 also is characterized by its energy efficiency.

Finally, Apple could also be something more pressing battery in the MacBook. In comparison with the predecessor you can last longer forward about one hour. This is mainly due to more energy-efficient components, the battery capacity has only been minimally increased (from 39.7 to 41.4 watt-hours). Unchanged is the single USB connector-c which can used both for charging and for the connection of accessories.

For many people, the most exciting news is probably the new color. If you have a rose gold iPhone 6s and 9.7-inch iPad Pro, you naturally want your MacBook matches. Apple has heard your wishes and offers its lightest laptop now also available in rose gold on. The Apple press photos it does seem to be exactly the same color as the iOS devices.

It is clear, even with the upgraded hardware, the MacBook not replace the Pro. The processors are still not powerful enough for professional applications. But the MacBook will be completely replaced. It is a super-light and mobile device and is not intended as your only computer “like the Pro. However, Apple had yet to present new USB c accessories, for now it is still a disaster. If you want to use multiple USB devices and to charge simultaneously, you can sell your Macbook Pro on MacBack and get the all new Rose Gold today.

We are very positive about the color. Rose gold looks very chic on the iPhone and iPad, and will also find a lot of fans on the MacBook. What do you think of the new MacBook?

Filed under: Lifestyle, Technology
Share Tweet Pin G Plus Email
previous article: A Guide for remote DBA experts on How to Secure the Oracle Database
next article: Geocaching 101: A Fun Family Activity