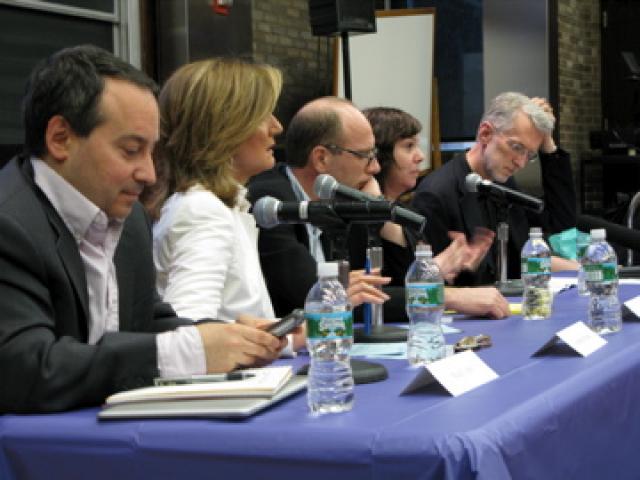 On March 28, 2008 at New York University, digital media trailblazers met to talk about how the web is changing American politics.

With Jeff Jarvis moderating, Arianna Huffington, Jay Rosen, Micah Sifry and Lisa Tozzi talked about the 2008 presidential electionsand what will come next. GroundReport.com produced the event and transcript. Below are a few highlights from the lively discussion

Micah Sifry on who’s ahead and why:
If it were not for the internet, I think it would clearly be the case that Hillary would be the presumptive nominee today.

Arianna Huffington on when we’ll see the real change:
We’ll never really fully see the power of the internet in politics until the current generation of consultants retires, because they are not really comfortable with the internet.

Jay Rosen on technology and organizing:
And the key insight is that when technology changes things, the next wave doesn’t require technology and geeks but a new understanding how to organize people. And that’s what Obama has done with the Web.

Lisa Tozzi on changing attitudes toward new media at New York Times:
Not that long ago, if I went to the Times’ editor on the print side and said, "You know what would be a really good idea? Let’s just get some readers’ questions asking you how you did your story," I would have been laughed out of the room. And now they come to us and say, "You know what would be really cool? If we got some readers’ questions."

Jay Rosen on the horserace mentality:
It’s portable. You can re-use it every year; it’s like the Christmas Tree in the box, right? You just take it out.

Arianna Huffington on "mixed" coverage of Iraq:
It’s like going to the doctor and the doctor says: "It’s a little of a mixed bag, on one hand your acne has improved, but one the other hand you have a brain tumor."

Lisa Tozzi on multiple perspectives in mainstream media:
I don’t necessarily see objectivity as insidious as other people see it. I think there is value to having a number of news organizations who express different voices, that’s what we love about the Internet. You don’t just go to the place where you are going to be in a room with everyone that agrees with you.