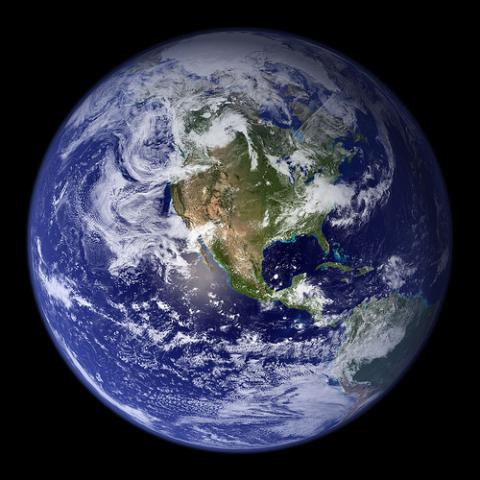 "Our analyses indicate that a process must have occurred in the first 30 million years of our solar system which resulted in the uneven distribution of matter in the solar system.”

Thus spoke Bernard Bourdon, Professor of Isotope Geochemistry at ETH Zurich, concerning new doubts about what has been, til now, a longstanding geochemical "given" about how the Earth formed.

Given the fact that chondritic meteorites–meteorites containing chondrules–have a similar chemical make-up to that of our Sun, it has been taken as a given that we can figure out what the solar nebula was made of, as the Earth coalesced into being from out of it. This, in turn, has led geochemists to assume that they have been able to figure out the basic chemical composition of the Earth’s core.

According to the Cosmic Lexicon, chondrules are:

Roughly spherical objects found in a type of meteorite called chondrites. Most chondrules are 0.5 to 2 millimeters in size and are composed of olivine and pyroxene, with smaller amounts of glass and iron-nickle metal. The shapes of the mineral grains in them indicate that chondrules were once molten droplets floating freely in space.

Meteorites that are older than the Earth have long been studied by scientists in order to put together an image of how the early solar system formed the planets.

However, the lithophilic, or "non-core", element neodymium discovered in the Earth’s surface differs somewhat from the meteorites in its isotopic make-up. The dynamic convection known to be constantly churning a complex mixture of rock within the Earth’s mantle rules out the proposition that there is a large surplus of neodymium in the Earth’s core.

A closer comparison and analysis of the two very similar elements samarium and neodymium followed, as their half-lives provide insight that allow geochemists to mentally reconstruct the formation of the solar system. This resulted in geochemists realizing that the Earth, the Moon, and Mars all have lithic compositions that contain anywhere from five to eight percent more neodymium and samarium than the chondritic meteorites do.

Bourdon remarks that while this is a small difference, it is a difference great enough to poke holes in the constructed model.

Recently, it was revealed that new astrophysical and geochemical data show that the Earth, the Moon, and Mars are compositionally unique in the solar system because they all formed somewhat apart from the rest of it, in a "unique stellar nursery".

According to Alex Halliday from Oxford University’s Department of Earth Sciences, a study of 16 Martian meteorites that came to Earth revealed "The Earth, Moon, and Mars appear to have formed in a part of the inner solar system with a ratio of samarium to neodymium that is around five percent more than could be found in the asteroid belt. It is this ‘family resemblance’ that we see today when we compare oceanic basalts from Earth with Moon rocks and Martian meteorites…[T]he composition of these worlds is inconsistent with them simply forming out of large ‘lumps’ of stony meteorites, like those we see today in the asteroid belt.’"