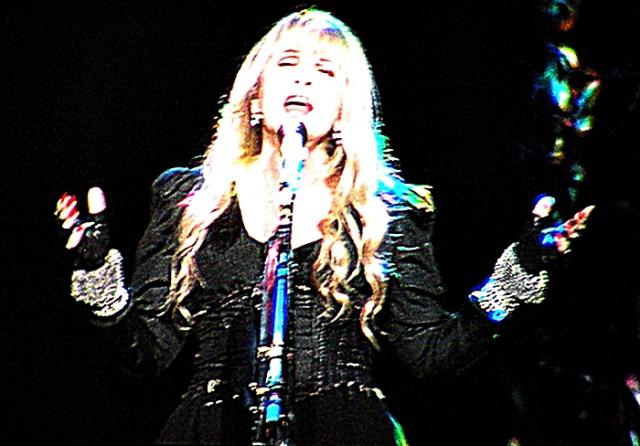 I had the distinct pleasure recently of attending a concert in New Orleans sponsored by AARP, of all organizations, given the following of the ladies involved.

It was a concert by Melissa Etheridge, Gladys Knight and Stevie Nicks, in conjunction with the National AARP Convention.

It would appear an attempt to change the image of AARP and give it a much "younger" vibe, as the focus of the convention was for those 50 and over.

Melissa Etheridge barely made the cut, at 51, but rocked the house with her soulful guitar riffs and songs.  She looks better than she has in years, and made reference to her past battle with breast cancer.

You wouldn’t know it to look at her, really.

Next up was Gladys Knight, and the season on Dancing with the Stars appears to have given her more energy and could hardly believe she is over 65.

She has the moves, and her brother (one of the Pips) contribution really made the show.

Then finally, one of my rock idols for many different reasons, Stevie Nicks.

All three of these particular ladies were actually born within a week of each other the end of May.  Geminis, all.

Which perhaps makes this review a little biased.

My own birthday is May 30, and connect with their music on almost a spiritual level.  The pain, and the angst, and the soul, that is.

Stevie was for many years a resident of my former home state, Arizona, whose father owned a concert venue there for many years, Compton Terrace.

She was absolutely incredible and sounds better than ever with the maturity her age and experience have given her.

Some of the "older" AARP members left during her set, which was a shame but then Stevie is a taste best left to the under 70 crowd, at least.  She rocks and makes no bones about it.

She performed a particularly poignant song about New Orleans from her current album, which was well received and appreciated.

She also performed a song "Soldiers Angel" which was written after a visit some years ago to Walter Reed Hospital and speaking with wounded servicemen.  She has become heavily involved in this cause, from what it appeared.

It was a more "national" crowd at this show, although the people of New Orleans and the surrounding area right now are pretty hard pressed to offer much in the form of donations – it was a very touching story and song.

As a matter of fact, I had gotten the tickets as a gift from a daughter who knew how strung out her mother was after Isaac and its aftermath, and caring part-time for elderly parents for months on end before that.

And although I had lived in Phoenix for over 45 years and graduated not but a few years behind Stevie, had never seen her live so when I mentioned the concert, sent me the tickets by return email.

But it was Ms. Nicks rock anthems and incredible voice that stole the show.

All poems set to music, actually, from an incredibly gifted poet.

I guess as a footnote, in order to truly help all those soldiers, and soldiers wives, mothers and families – I hope someday she will lend her incredible voice and support into stopping some of these senseless wars – as she should also know as one from the Vietnam era herself.

Since it does appear that neither party is willing to end one at this point, without shortly beginning another…

How many men have been lost through five decades of war?

AARP isn’t ready for us…